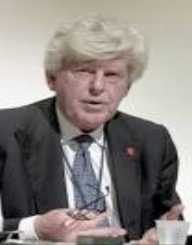 Willem Frederik Duisenberg was born 9th July 1935 to Lammert and Antje Duisenberg. He was born in Heerenveen, in the Netherlands.

He studied at two different local high schools before moving to Haren in 1954. Duisenberg enrolled at the University of Groningen that same year, and he studied there until 1961. He achieved his master's degree in economics.

Duisenberg became politically active in university. Due to this, in 1959, he joined the Labour Party.

He received his doctorate in 1965.

Willem Frederik Duisenberg moved to the U.S., where he worked for the International Monetary Fund. As a result, he lived and worked in Washington, D.C. for several years.

He then went back to the Netherlands, where he worked for the Nederlandsche Bank in Amsterdam. The Director of the bank hired him as an adviser.

After leaving the bank, Duisenberg joined the staff at the University of Amsterdam, as a professor. He taught macro-economics.

In 1973, Willem Frederik Duisenberg became Minister of Finance. He held the position until 1977, after which time Rabobank appointed him as the Vice President.

Two years later, the Nederlandsche Bank appointed him as the Director. He served as the bank's President from 1982 to 1997.

In 1998 the European Central Bank formed, and Willem Frederik Duisenberg became the first President of the bank.

His approach to monetary policy was cautious, but that is why he got the job in the first place.

Among his awards and honors, Willem Frederik Duisenberg has the following:

Willem Frederik Duisenberg married Tine Stelling in 1960, but the couple divorced in 1980.

In 1987, he married Gretta Nieuwenhuizen. They were still together when he died.

He had three children between his two wives.

On  July 31, 2005, Duisenberg died of a heart attack while he was on vacation in France.