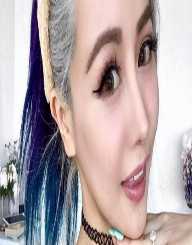 Wengie was born on January 9, 1986, in Guangzhou, China. She is an Australian You Tuber and a social media personality. She is thirty-one years old, and she loves making videos that she then posts on her YouTube Channel.  She has more than five million subscribers and more than fifty million views on her YouTube Channel. She is Chinese who was born in China but raised in Australia.

Wengie mostly posts videos of beauty tips among other videos that entail other subject matters. She has an enormous impact on the youths due to her remarkable and lovely videos. She loves her career as a You Tuber. She quit her corporate job to enter into the video making business. She loved her job, but she loves You Tubing more. Her videos positively influence a lot of people.

Wengie was an ordinary working woman who had a corporate job before she quit her job and joined YouTube. She earned a six-figure salary, but she still left her career behind to become a You Tuber. She started blogging on YouTube as a casual thing not with the intention of making any monetary gain, but her passion was in making videos, and so she could not ignore the opportunity she had with the introduction of the internet which brought with it YouTube.  She was very serious about video making that when she started, she did not look back or even regret the choice that she had made.

Wengie started posting videos, and within no time she had reached a million subscribers. She has also created two other YouTube channels titled ‘LifeOfWengie’ and ‘wengieofficial.’ Her two YouTube channels also have a lot of followers who adore her. She was not so excited when the views on her videos hit one million, but she was just as usual. She loves what she does and making her fans happy is the priority on her to do list.

Wengie ensures that she shows how much she loves her fans for the numerous support that they give her. She also has a supportive family who helps her in every step that she takes in her life and career. She acknowledges the day she quit her job to have a career on YouTube was the best day of her life and the most significant decision that she has ever made in her life.

Wengie is open-minded and very sure of the decisions that she makes. She is also level-headed and not in any way looking for people’s attention, but she loves doing what she does because her aim is always to provide her fans or audience with the best experience possible via the videos that she posts online. She loves offering new skills to her fans, and she ensures that she is always at the top of her game. She is a hardworking, determined and a beautiful young lady who will stop at nothing to ensure that she achieves her goals in life.

Wengie is a role model to many young youths. She has not been involved in any major controversies as she avoids anything or anyone that may bring too much attention towards her. She is destined for greatness as she is not giving up on whatever she loves doing best and that is making videos that encourage and empower people.

Wengie was born in China but raised in Australia. She is a Chinese lady who loves what she does. She is just an ordinary girl even though she is popular among the youth and her mates as well. Her real name is Wendy Ayche, but her fans prefer calling her Wengie. She is a huge fan of Justin Timberlake and Taylor Swift. She has posted covers of songs that have been sung by both Justin Timberlake and Taylor Swift.