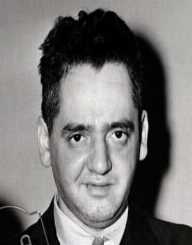 Arthur (Usher) Fellig popularly known as Weegee was an Austria-Hungary photographer and photojournalist. Born on June 12, 1899, he was known for his blunt New York street photography mostly of crime and disaster-related scenes. His works comprised of crimes, urban life, injury, and death.

Weegee worked as a press photographer in Manhattan, New York in the 1930s and 1940s, during which he became famous for on-time photography by following New York City’s emergency services when attending distress calls. He worked in the cinema by making personal short films and worked with film directors including Stanley Kubrick and Jack Donohue. Weegee also published some photography book.

Weege was born Arthur (Usher) Fellig on June 12, 1899, Ukraine (then Zloczow) near Lemberg in Austrian Galicia. He was the second child of four by Bernard Fellig and his wife. His name Usher became Arthur while at Ellis Island.

He dropped out of school in his teens to pick odd jobs to support the family. Fellig picked a job in the darkroom of Acme News pictures in 1923. This allowed him to take rare photographs at night learning on the job to perfect his skills. To sustain his life and that of the family, he also picked other low pay jobs until he became a freelance photographer in 1935.

Weegee since worked for some New York newspapers. He later earned the nickname, Weegee, a phonetic rendering of Ouija (a device used in occultism to receive messages from the spirit world) because he arrives at scenes of crimes, fires or other emergencies just when they happen sometime before the police come.

Weegee used necessary press photographer equipment for his striking photographs, which were outstanding at the time. A 4x5 Speed Graphic camera preset at f/16 at 1/200 of a second with flashbulbs and a set focus distance of ten feet. He did not have any formal photographic training. He was a self-taught photographer who developed his photographs in an improvised darkroom at the rear of his car. This provided a rapid result to his work that highlighted the nature of the tabloid industry and gave the images a "hot off the press" sensation. When asked about his photographic technique, he was prompt in answering “f/8 and be there”.

Weegee was a night king and relatively competed with the police on who reaches a crime scene first. This has become a cliché in the photography fraternity. He was the only newspaper reporter that had a permit to have a portable police-band shortwave radio (1938). He continued to use the rear of his car to enable him to get his product to the newspapers.

He was always beating authorities to the scene through listening keenly to broadcast. Most of his works were around Manhattan police headquarters. His photographs were published in Daily News, Herald Tribune, the Sun, New York Journal American, and World-Telegram.

In 1943, the Museum of Modern Arts published five of his photographs. His works were included in their exhibition entitled, Action Photography. He is covered in the "50 Photographs by 50 Photographers", a MoMA show organized by photographer Edward Steichen. He taught at the New School for Social Research.

Weegee was diagnosed with diabetes in 1957. He since moved to stay with his friend Wilma Wilcox, who catered for him. Despite his illness, Weegee continued to travel through Europe until 1968. He died on December 26, 1968, at age 69 in New York.