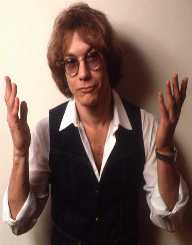 Warren Zevon was born in 1947 as Warren William Zevon. He was born in Chicago, in the United States. His mother was Beverly, of English descent, but the father was an immigrant from Russia, William.

William was of Jewish descent. Initially, the surname of the father was different. It was Zivotovsky, which was later changed to Zevon. At the age of thirteen, Warren Zevon started studying music from Igor Stravinsky. When Warren was sixteen years old, his parents divorced. After the divorce, Warren Zevon decided to move to New York, where he planned to become a folk music singer.


Beginning of the career

The first musical band Zevon was in was called Lyme&Cybelle. This he founded together with a friend from high school, Violet Santangelo. He composed several songs for “The Turtles,” and the song “She Quit Me” was used for a movie “Midnight Cowboy.”

The first solo album by Warren Zevon was released in 1969. It was called “Wanted Dead or Alive,” but was unsuccessful financially.

After the release of the album, he participated in several other music projects, but they were minor and did not succeed to bring him any substantial income. Therefore in 1975, he moved to Spain. There he lived during the summer and performed in a bar just outside Barcelona. During the time he composed “Roland the Headless Thompson Gunner” with David Lindell. David Lindell owned the bar.

After a couple of months in Spain, Warren Zevon returned to the United States. He started to work with Jackson Browne in 1975. Browne helped Zevon produce a debut album, which was released in 1976.

Some well-known people contributed to some of the songs, such as Mitch Fleetwood, some of the band Eagles, Bonnie Raitt, Linda Ronstadt and others. This album was more successful financially than the first one and later was called Zevon’s best work. Some of the most recognized songs from the album are “Carmelita,” “The French Inhaler” and “Desperados Under the Eaves.”

Excitable Boy and other albums

Next year, in 1978, another album was released. It was called “Excitable Boy.” Browne once again produced this album. A couple of decades later, the “Rolling Stone” named the album one of the most noteworthy albums of the seventies.

Warren Zevon released several more hits after this album. One of them was “Bad Luck Streak in Dancing School,” where he worked together with Bruce Springsteen and Linda Ronstadt. The other came out in the late eighties, “Stand in the Fire.”

In 1982 WarrenZevon released an album “The Envoy.” The album was not commercially successful, and the distributor ended the cooperation with Zevon.

WarrenZevon, unfortunately, learned the news only by reading about in a gossip column of the “Rolling Stone,” and it set him into an alcoholism relapse. He had problems with alcohol abuse also before, but this turn of events made it deteriorate very intensively. After this incident, he started abusing drugs also.

He went to a rehab institution in 1984. For several years Zevon was laying low and was not heard about in the music circles.

It took Warren Zevon 3 years to fully rehabilitate from alcohol and drug abuse. He returned in 1987 with an album “Sentimental Hygiene" which was released by “Virgin Records.” Very soon after that, only two years later, the album “Transverse city” followed. This album was so unsuccessful, that “Virgin Records” decided to end the cooperation just months after the release of the album.

Very soon after that Warren Zevon found another producer, and released some other songs that were highly recognized, like “Searching for a Heart” and “Things to Do in Denver When You’re Dead.”

He worked on several other projects after that. Some of his songs got included in movie soundtracks. In 1996 the best hits of Zevon were compiled in one album and released by “Rhino Records.” It was called “I’ll Sleep When I’m Dead.” After this album, he participated in several television shows and performances as a guest.

After the release of the album in 1996, Zevon disappeared from the stages, only to return in 2000. He returned to the album “Life’ll Kill Ya.” This was considered the second comeback after the first comeback with the “Sentimental Hygiene” in 1987.

In 2002 Warren Zevon discovered that his health was deteriorating. He got a chronic cough and dizziness, and sometime later got diagnosed with mesothelioma in his lungs. This type of cancer affects the membrane around the lungs and is highly dangerous. Zevon’s son later claimed this might have been triggered by coming in contact with asbestos when Warren Zevon was a child.

Warren Zevon refused treatment for cancer. He thought the procedure might exacerbate the condition and be not too helpful. Then he recorded fragments for another album “The Wind.” Many of his closest friends participated in it. He later in 2002 appeared on the David Letterman show as a guest, where he spoke about his disease and came up with a suggestion for viewers.

The suggestion was to enjoy every sandwich. Such a remark went well together with Zevon’s sometimes sarcastic, sometimes slightly morbid outlook on life that is also appearing in his music. Warren Zevon died in 2003. He was 56 years old.

He chose to be cremated, and after the cremation, his ashes were scattered into the ocean.

Warren Zevon was married once, to a woman named Crystal. Unofficially Crystal is referred to as the second wife of Zevon, as he was before that in a long-term relationship with Marilyn. They had together a child with Marylin, a son Jordan, but they never married nevertheless.

After his death, the work of Warren Zevon was not forgotten. He received five Grammy nominations, two of them for the latest album “The Wind.” The album received the Grammy as the best contemporary folk music album, and the song “Disorder in the house” was awarded for being the best rock performance.