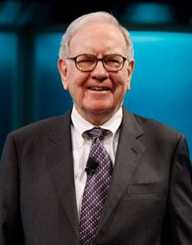 Warren Buffet is known as one of the wealthiest men in the world as well as an extremely frugal person who likes to give back to the society. A billionaire, Mr. Buffet served as the chairman and CEO of Berkshire Hathaway and made a fortune by acquiring undervalued companies and building partnerships. His keen business mind has made his net worth well over 70 billion dollars.

Warren Buffet was born as Warren Edward Buffet on August 30, 1930. His birthplace is Nebraska, Omaha, United States. His father, Howard, was a stock marketer and used to take him to his office where Buffet developed an acute sense of how money works and how to make more money. His mother Leila Stahl was a housewife.

Warren Buffet had two siblings – both sisters. He learned the art of investing at an early age. When he was 11, he made his first investment and bought three shares of Cities Service. He sold them later at a marginal profit. By age 12, he had already started making plans for generating money. His ability to calculate with significant numbers helped him a lot during those days and even later in his life.

Warren Buffet got his education from different schools.  He went to the Woodrow Wilson High School, and then attended the University of Pennsylvania at age 16. Two years later, he went to the University of Nebraska and graduated when he was 20 with a handsome $10,000 in savings that he made using his business skills.

Warren Buffet learned the ins and outs of investment and business while working as an analyst at the Graham Newman Corp. for two years. During this time, he developed his insights about the process.

As a Business  Magnate

After the firm closed, Warren Buffet founded Buffet Partnership in 1956 and focused on acquiring undervalued companies and made huge profits. By 1965, he had acquired enough shares of Berkshire Hathaway, a textile manufacturer, to gain ownership of the company.

In 1969, Warren Buffet started migrating the company from textile towards the acquisition of insurance. He then bought the shares of The Washington Post and EXXON turning Berkshire Hathaway into a conglomerate of different sectors. Soon he was a multi-millionaire with profits generated from these acquisitions.

In 1989, Warren Buffet became the Director of the Coca-Cola Company and remained so till 2006. He also served as the Director of Citigroup Global Market Holdings, Graham Holdings Company, and The Gillette Company. He has also used his wealth for social causes. His company built a website Drive2Vote to encourage people to vote, in 2016.

Warren Buffet is known as one of the greatest philanthropists. In 2006, he committed to slowly donate 85% of his entire wealth to charity foundations, a majority of which will go to the Bill & Melinda Gates Foundation.

Warren Buffet along with Bill Gates and Mark Zuckerberg has signed The Giving Pledge, according to which the wealthy members promise to donate at least half of their wealth to charity.

Warren Buffet was awarded the Presidential Medal of Freedom, in 2011, by then President Barrack Obama.

Warren Buffet first married Susan Thompon with whom he had two sons – Howard and Peter. He also has a daughter named Susan Alice Buffet.  Although they did not officially divorce, Susan left him in 1977 to pursue her career dreams.  She passed away in 2004.

In 2006, Buffet married his long-time partner Astrid Menks. Despite his immense wealth, Buffet is an extremely frugal person in his daily life. That said, he does own a $4 million house in Laguna Beach, California and a private jet, named the Indefensible.

In 2012, Warren Buffet was diagnosed with prostate cancer. He has recovered since, after undergoing treatment. Buffet takes an active interest in politics and has openly opposed the policies of the current U.S. President Donald Trump.