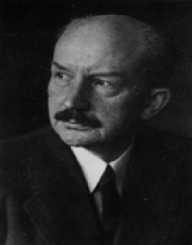 Walther Bothe was a German physicist born on January 8th, 1891. He was He was the 1954 winner of the prestigious Nobel Prize in physics. He shared the prize with his associate Max Born.  The great physicist is best remembered for his contributions towards the “Coincidence Method.” It is with this development that he won the Nobel Prize. Aside from being a physicist, Walther Bothe was a painter as well. Most of his paintings were inspired by mountains.

He also took piano lessons while he was alive. Walther Bothe is best described as a man of speed and great concentration. He was quite strict in his profession as a teacher contrary to the hospitable and gracious man he was at home.

Walther Bothe was born in born on January 8th, 1891. His place of birth was in Oranienburg, a town close to Berlin in Germany. He was the son of Fredrich Bothe and Charlotte Hartung. His passion for physics developed from a young age.

Walther Bothe joined the Friedrich-Wilhelms-Universität in 1908. It is currently the Humboldt University of Berlin. The prominent physicist, Max Planck tutored him. He was a bright student. He performed quite well in chemistry, physics, and mathematics. By 1912 he was through with his studies.

In 1913, Walther Bothe taught as an assistant to Planck. Meanwhile, he also did his doctorate studies still under Planck. He attained his doctorate later in 1914 just before World War I broke out.

After his doctorate graduation, Walther Bothe joined the German cavalry. He later served five years in prison in Siberia after he was captured by Russians. During this time, he utilized his time learning Russian. He returned to Germany a free man in 1920.

Till 1930, Walther Bothe served as a Professor Extraordinary of Physikalische-Technische Reichsanstalt. Currently, it is referred to as Physikalisch-Technische Bundesanstalt.

He conducted many experiments and came up with his theories during his physicist career. His greatest associate was Hans Geiger whom they later shared a Nobel Prize. The two experimented on properties of radiation in 1924. This led to the development of the quantum theory of radiation.

In 1929, Walther Bothe devoted his time to cosmic rays. He studied the rays along with Bruno Rossi and Sir James Chadwick who were visiting professors. Later in 1932, the University of Heidelberg appointed Bothe, the director of its Physical and Radiological Institute.

In 1940, his research paper was published with the title Atlas of Typical Cloud Chamber Images. Henceforth from 1946 till 1957, he served at the University of Heidelberg as an ordentlicher Professor. During this time, he also became a member of the Nuclear Physics Working Group (Arbeitskreis Kernphysik).

In 1952, Walther Bothe was honored with Knight of the Order of Merit for Sciences and the Arts. Later in 1953, the Deutsche Physikalische Gesellschaft awarded him Max-Planck-Medaille. In 1954 he shared the most prestigious award which was the Nobel Prize in Physics with Max Born.

In 1920, Walther Bothe tied the knot with Barbara Below. The couple was blessed with two children. The great physicist loved to listen to music during his free time. His favorite songs were pieces by Bach and Beethoven.

Walther Bothe took his last breath on February 8th, 1957. His death occurred in Heidelberg, West Germany when he was 66 years old.