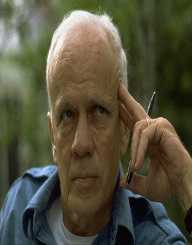 Walker Percy was born 28th May 1916, to LeRoy and Martha Percy. He was born in Birmingham, Alabama, in the United States. Percy was the oldest of three brothers, in what would become a troubled family. Percy’s grandfather committed suicide in 1917, and this was followed by Percy’s father committing suicide when he was 13. The family moved into his grandmother’s house in Georgia, and two years later his mother drove a car off a bridge which killed her. He always thought of this as another suicide.

The boys were taken in by one of their cousins.

Percy studied at the University of North Carolina, and then he studied at Columbia University in New York from where he graduated in 1941 with a medical degree. While working at Bellevue Hospital Center, he contracted tuberculosis. There was no cure at the time except for rest, and Percy spent the next several years at the Trudeau Sanitorium in New York recuperating.

Walker Percy read a lot during his years of recovery, including the works of Soren Kierkegaard from Denmark, and Fyodor Dostoevsky from Russia.

During his years of recovery, Walker Percy had also begun to attend Mass every morning while questioning the mysteries of life. This was reflected in his first work, an essay that was published in the Catholic magazine, Commonweal, in 1956. The article was against the racial segregation of the Southern regions, and it called for more Christian thought in their way of life.

He taught at the Loyola University of New Orleans in the 1980s, where he mentored young writers.

In addition to fiction, Percy published approximately 15 non-fiction works, including books and essays. One of the most popular was Lost in the Cosmos: The Last Self-Help Book which was released in 1983.

Among his awards and honors, Walker Percy had the following:

1989:   Awarded the Laetare Medal by the University of Notre Dame

In November 1946, Walker Percy married Mary Bernice Townsend, a medical technician. The couple studied Catholicism and were received into the church in 1947. The couple had two daughters. The first was adopted, the second was conceived naturally.

Percy died in 1990 from prostate cancer.