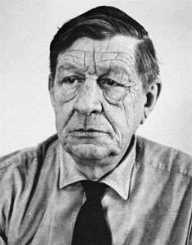 Wystan Hugh Auden was born on February 21st, in 1907. He was a renowned English-American poet. Due to his exceptional writing skills, he was regarded as one of the best poets of the 20th century. His style of writing was unique as it encompassed politics, religion, love, and morals in the society. His works were not only rich in content, but they also had a remarkable tone and form.

W. H. Auden was born on February 21st, 1907 in York, England. He was the third born son of George Augustus and Constance Rosalie. His father was a professional physician whereas his mother was a trained nurse. George Bernard, his eldest brother, later became a farmer. On the other hand, John Bicknell, his other older brother rose to become a geologist.

Auden joined St Edmund's School located in Hindhead for his early education. It is while studying here that he met the acquaintance of Christopher Isherwood. Isherwood later became a famed novelist in his way. When he clocked 13, he enrolled in Gresham's School, Norfolk. Around this time, he realized that he had lost his faith in religion. He also played different roles in school plays such as The Taming of the Shrew and The Tempest.

W. H. Auden began writing poems while he was still in school. Some of the poems that were initially published appeared in the school’s paper. This was in 1923. After earning his biology scholarship in 1925, he went ahead and studied at the Christ Church, Oxford. However, he changed courses by the time he was in his sophomore year. He also made important friends while studying here. Some include Louis MacNeice, Stephen Spender, and Cecil Day-Lewis. Together, they were commonly referred to as the "Auden Group." Auden completed his education here in 1928.

Months later, W. H. Auden shifted from Britain to Berlin. Here, he faced particular economic and political issues which would then influence him to write on the subjects. The following year, in 1929, he was back to Britain. After that, he went to tutor for a short period.

In 1930, Poems, his first published book was accepted by Faber and Faber Limited publishers. This was a huge deal for him as the publishing company later released all his subsequent works. For the next five years, Auden took the role as a schoolmaster in schools found in Scotland and England. First, he was the schoolmaster at Larchfield Academy for two years. Later, he went to the Downs School where he took the same post for three years.

Still, in the 1930s, Auden’s works brought him high acclaim as he often talked about the evils that came along with capitalism. Through his poems, he advocated for a revolution that would bring a change in the society. He mainly stressed the importance of changing the hearts of the people.

Soon, Auden tried his luck with the film industry and went to work with G.P.O. Film Unit. The Unit’s theatre later performed some of his plays. He made a point of supervising these plays to guarantee perfection.

In 1947, W. H. Auden penned a poem titled The Age of Anxiety: A Baroque Eclogue. This was considered as one of his greatest poems. He was awarded the Pulitzer Prize for this remarkable work.

Auden tied the knot to Erika Mann in 1935. This marriage was unique as it was unconsummated. He only married Mann for the reasons of helping her obtain British citizenship. Supporting her would ensure that she was not a victim of the bitter Nazi Germans. The two later separated. Four years later, he crossed paths with Chester Kallman whom he fell in love with. Their romantic relationship lasted for only two years.