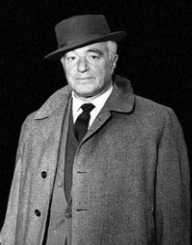 Vittorio De Sica was born on July 7, 1901, in Sora, Italy. His father was Umberto De Sica.

Vittorio De Sica broke into the film and television industry in the 1920’s. He began as an actor working on the stage. It didn’t take him long to get noticed, and in the early 1920’s he started acting in front of the camera instead of on the stage. The first project on camera that he appeared in was The Clemenceau Affair. This taste of cinema would encourage a love of the camera that would Vittorio De Sica his whole lifetime.

He worked with a variety of companies as an actor, and in the 1930’s he made his own company. He acted in many films with his then-wife, Giuditta Rissone. Some of the projects he acted in up until 1940 are listed below.

Vittorio De Sica stayed an actor until the mid-1760’s. He mainly took on small parts in films and television shows after he was 40 years old. He did this mostly to fund his career as a director. In the 1940’s, he decided to turn to directing. Directing was where his real talent stood out. The first film he ever directed was Rose Scarlatte. He focused on directing, but he would often act in his films.

He specialized in post-war films and films that focused on small-time life and the drama that comes with it. The only problem with his directing is that his company was relatively poor. Vittorio De Sica had to use actors that did not have a lot of training. Luckily, he always had a creative idea up his sleeve that could jazz up his films. He continued to direct from the 1940’s until the early 1970’s. Below are some of the films he directed after 1940.

During his long career in the film and television industry, Vittorio De Sica won awards for both acting and directing. He won more than two dozen awards, and he was nominated for a dozen more. Some of his most prestigious awards are listed below.

Vittorio De Sica was first married in 1937 to Giuditta Rissone. However, the marriage ended in 1954. He married again in 1959 to Maria Mercader. This marriage ended with De Sica’s death. Altogether, he had three children: Christian, Emi, and Manuel.

Vittorio De Sica struggled with many problems near the end of his life. His lungs especially problemed him. He had to get surgery to help with his problems, but the procedure was unsuccessful. He died on November 13, 1974, in Italy. He was 73 years old when he passed away.