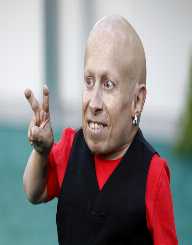 Verne Troyer an actor, stuntman, and comedian, most famous for his role as Mini-Me in Austin Powers series. He is 2 ft 8 in tall, due to cartilage-hair hypoplasia dwarfism. The rest of his family members are average sized.

Verne Troyer was born in Sturgis, Michigan in the United States of America. He was born on 1st January 1969 to Susan and Reuben Troyer. He has an older brother and a younger sister. The Troyer family was Amish, so Verne was part of an Amish community until the family left the religion.

He attended Centreville High School and graduated in 1987. Soon after, he moved to Arlington, Texas to be with his brother.

Before show business, Verne Troyer had many jobs. He was a telephone operator, a candy wrapper; he had also worked in a women’s abuse shelter and many more.

In 1993, Verne Troyer got into a role of stunt double for a 9-month-old baby on Baby's Day Out (1994). Since then he has appeared in 15 films and televisions shows. Troyer continued to be in films, but in costume as animals. He was an orangutan in Dunston Checks In (1996), and in Mighty Joe Young was a baby gorilla. In Masked Rider he was a stuntman for Paul Pistore and worked as a stuntman in Volcano, Rocketman, and Jingle All the Way.

His claim to fame helped him get into films like Men in Black, Harry Potter and the Sorcerer's Stone (as Griphook), and How Grinch Stole Christmas. He was also the voice of Jackal X in video game Let It DIe.

He also guest-hosted WWE Raw in 1993 and was a housemate in The Celebrity Big Brother 2001. In Big Brother, he was favored to win but finished 4th place in Season 6. He was a guest star in some television series, like Sabrina the Teenage Witch, Two and a Half Men, and the Boston Republic. Verne Troyer has to do all his stunts due to his different height, as no one else can be his double.

Verne Troyer was nominated for Best Supporting Actor: Comedy in Blockbuster Entertainment Awards, for Austin Powers: The Spy Who Shagged Me. For the same movie, he was nominated for MTV Movie Awards’ Best Fight and Best Musical Performance. He did not win any of the three nominations.

Verne Troyer’s parents were Amish and left the faith when Verne was a child. He was raised with similar strict values.

Verne Troyer became famous after playing Mini-Me in Austin Powers series. He also appeared in big blockbusters such as Harry Potter, Men in Black and Jingle All the Way.

Verne Troyer had cartilage-hair hypoplasia dwarfism. He is 81cm tall, making him one of the shortest men in the world. He is also an alcoholic and had checked into a clinic in Malibu following a trip to the hospital due to stomach ache.

Verne Troyer denied reports of marrying Playboy Model Genevieve Gallen, they were married in January of 2004, but reports said that he filed for an annulment the day after, some say a month after the wedding.

In 2008, he was in a legal battle over a sex tape made by Ranae Shrider and him. He managed to settle out of court to stop the tape from being sold.

In 2009, Yvette Monet had been granted a restraining order against Verne Troyer after a split. It was alleged that Troyer was constantly harassing her. Verne denied that he was intimidating her and only found out about the order on social media.