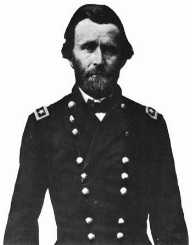 Ulysses S Grant was the 18th President of the United States if America and was also commander of Union forces during the American Civil War.

Ulysses S Grant was born 27 April 1822 in Ohio. Grant’s father Jesse Grant worked as a tanner. Grant attended private schools in Ohio for his early education. Grant also worked on a farm and developed a fondness for horses and riding. At the age of sixteen Grant was nominated to attend the military academy at West Point in New York. Grant trained at West Point for four years. Grant excelled at horsemanship and geometry but found little joy in his studies. Upon leaving the academy, he had achieved the rank of second lieutenant and was made the quartermaster of the 4th Infantry Regiment.

Ulysses S Grant first saw action during the Mexican-American War which was fought from 1846 to 1848. Grant saw combat at Battle of Resaca de la Palma and Mexico City. Grant was made an acting captain during the war and developed a great admiration for General Zachary Taylor. However, was privately against the war seeing it as unjust and part of a pro-slavery policy in the United States. After the conclusion of the war, Grant was deployed to the Pacific Northwest to oversee the U.S territories in the region. Grant received postings all along the West Coast and developed a drinking habit during the many idle hours he had in camp. His drunkenness became a major issue and Grant resigned from the army in 1854.

Ulysses S Grant worked as a farmer and as a tanner following his resignation. He enjoyed little success as either. Grant was a supporter of the Democrat Party at this time, which Grant felt led to discrimination against him. After abandoning his attempt at farming Grant released a slave who he owned, this was in spite of the slave’s high value and Grant’s poor financial position

Return To The Military

With the Confederate States of America’s secession and attack on Fort Sumter, the American Civil War begun. The Union called for thousands of volunteers to join the army. Ulysses S Grant took an active role in recruiting volunteers and received a militia commission. Grant was soon given a full army commission and promoted to Colonel and then Major General.

Ulysses S Grant took command of troops in Illinois and attacked Confederate positions in Missouri. Grant also captured Fort Henry and Fort Donelson in Tennessee. These victories made Grant a hero in the national media. Things quickly changed though as Grant oversaw a costly victory at the Battle of Shiloh. Despite the victory, Grant suffered over 13,000 casualties and was relieved of his command. Grant was quickly reinstated though and achieved another victory at the Battle of Iuka. Grant took control of the District of Tennessee and began incorporating slaves freed by the Emancipation Proclamation into the service of the Union Army. Grant was tasked with taking Vicksburg, the last Confederate stronghold on the Mississippi. After a seven month campaign and a seven-week siege, Vicksburg surrendered to Grant. Grant’s success seen him receive command of the Armies of Ohio, Tennessee, and Cumberland.

Ulysses S Grant led his troops in the Chattanooga campaign and achieved some decisive victories that left Confederate Georgia open to invasion. President Lincoln made lieutenant general and overall commander of Union forces. Grant began to coordinate a combined offensive by all Union armies on the Confederate heartland. Grant’s campaigns achieved very slow progress and suffered huge numbers of casualties. His forces became mired in indecisive battles and lengthy sieges. The Northern public began to turn against Grant and the War as a whole.

However, Grant’s efforts were wearing down the Confederates, who much less able to replace losses. While Ulysses S Grant was caught in a stalemate at Petersburg, General Sherman began devastating the state of Georgia and captured Atlanta. Peace talks began but proved fruitless. Grant was eventually able to force the surrender of Robert Lee and his army who lay down their arms; this effectively ended the Civil War. Five days after Grant's victory over Lee, President Lincoln was assassinated. Grant had been invited to attend the theatre with Lincoln on the night he was assassinated and openly shed tears at his funeral.

After The Civil War

Ulysses S Grant was made General of the Army of the United States and began to take part in the reconstruction of the country. Grant was President Johnson’s key military advisor at the time, although the two men disagreed on some issues. Grant attempted to show loyalty to the presidency but felt Johnson’s actions were endangering the fragile peace. Grant began to side with Congress, and this left Johnson isolated. Congress gave Grant full control of Reconstruction in the South, which remained under military rule. His public disputes with Johnson made Grant a very popular figure, and he gained the Republican Party nomination for the 1868 presidential election. Grant achieved an electoral college landslide and became the 18th president of the U.S.A.

Ulysses S Grant attempted to achieve reconciliation during his presidency, with the South, between blacks and whites and with the Native American tribes. Grant oversaw the re-admittance of the southern states to Congress. The Grant administration also led a crackdown on the Ku Klux Klan and integrated the postal service. Ulysses S Grant also passed a civil rights acts but could not prevent the south electing hardline Redeemer Democrats. Grant also approached the Indian Tribes as part of the United States rather than as foreign forces. He wished to integrate them into America as citizens.

This was the exceptionally progressive approach for the time, but it did fail to recognize the unique cultures of the many tribes. Grant’s work with the Native Americans was ultimately undone by the discovery of gold in the territories given to the tribes. Ulysses S Grant oversaw a volatile time in the U.S economy known as the Gilded Age. This period saw rapid industrialization, the expansion of railroads and speculation markets. Grant also brought in the gold standard. Grant declined to run for re-election in 1876 as he faced mounting criticism.

Ulysses S Grant married Julia Dent in 1844, and the pair had four children. Due to a worsening financial situation, Grant was re-awarded his General of the U.S Army position to provide him with the public pension he lost during his time as president. Grant contracted throat cancer and died on 23 July 1885. Shortly after Mark Twain published Grant’s memoirs. A great mausoleum was built for Grant, and he is currently interred in the General Grant National Memorial. Grant’s portrait was added to the fifty dollar bill in 1913.