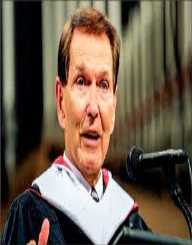 Tim Francis LaHaye was an active minister, speaker, and author.

Timothy Francis LaHaye was born on April 27, 1926, in Detroit, Michigan to the couple Frank LaHaye and Margaret LaHaye (nee Palmer). Tim lost his father in 1936 when was nine. The loss of his father had a significant impact on Tim.

In 1950, Tim LaHaye did his Bachelor of Arts from Bob James University in Greenville, South Carolina. He achieved the Doctor of Ministry from the Western Seminary and a Doctor of Literature from Liberty University.

Tim LaHaye joined the US Army in 1944 at the age of 18. He was a machine gunner abroad a bomber.

He worked as a pastor in Pumpkin town, South Carolina. He was a preacher in Minneapolis until 1956. Tim shifted to San Diego, California. He was a vicar of the Scott Memorial Baptist Church for 25 years. In 1971 Tim and Henry M Morris founded the Institute for Creation Research at Christian Heritage College in El Cajon, California.

Tim commenced small groups to encourage his views during 1970-1980. He was one of the members of the Board of Directors of Moral Majority. Tim’s wife, Beverly founded the Concerned Woman for America, a women’s group.

In 1981, he resigned his position in the church with the intention of trying his political and writing career. He established a Council for National Policy – a think tank.

Tim LaHaye similarly founded the American Coalition for Traditional Values and the Coalition for Religious Freedom, and Pre-Tribulation Research Centre during 1980-1998. Tim and his wife were also associated with an anti-communist group, John Birch Society.

During 2000-2007, he campaigned for the presidency of Ronald Regan and George W. Bush.

He wrote ‘Left Behind’ series describing the destruction of earth.

In 2001, Tim LaHaye hosted a television program entitled The King Is Coming. In 2001, Tim founded Liberty University for which he donated $4.5 million to create a student center. The center was named after LaHaye. He was also the president of that center. Later in 2006, he provided funds to create LaHaye Ice Center on the Liberty University campus and inaugurated in Jan 2006.

Tim LaHaye wedded a fellow author Beverly Ratcliffe in 1947. The couple celebrated their 69th wedding anniversary in July 2016. They had four children and nine grandchildren. They resided in Los Angeles. They have property at Rancho Mirage, California.

Tim died at 90 on July 25, 2016, in San Diego, California. He suffered a stroke. He is survived by his wife, four children, and nine grandchildren, 16 great-grandchildren, a brother and sister. He was cremated on August 12, 2016.