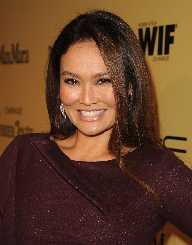 Tia Carrere is most famous for her role as Cassandra Wong, singer/lead guitarist of a band in the movie “Wayne’s World.”

Known for her exotic looks and perfect body proportions, Carrere is a film & television actress, and a singer. She has won two Grammy awards for her albums – one in 2009 for “Ikena” and the second in 2011 for “Huana Ke Aloha.”

She has also starred in a variety of roles, from good to evil characters, in a career over two decades.

Tia Carrere’s birth name is Althea Rae Janairo. She was born in Hawaii, Honolulu on January 2, 1967. Her mother Audrey was a computer supervisor, and her father Alexander Janairo was a banker.

Tia Carrere is of a multiracial ancestry – Chinese, Filipino, and Spanish. At 13 years of age, Tia’s father had a job transfer. The family moved, but she stayed back in Hawaii and lived with her grandmother.

As a child, she dreamed of becoming a singer.

It is widely believed that she got her nickname “Tia” from her sister, who had difficulty pronouncing Althea. Carrere however, chooses to stay mute on the topic.

Her early education was in a co-ed school, but she soon enrolled in the Sacred Hearts Academy, an all-girls school. She studied there through 10th grade.

After finishing school, she moved to Los Angeles. She was 16 and looking for a break in the acting industry.

Tia Carrere has done a variety of roles after starting in the late 1980s. She has starred in a few major movies, such as True Lies and also played many television characters in her two-decades-long career.

She has also landed modeling jobs due to her stunning looks. Carrere has also fulfilled her dream of becoming a singer, with five albums and two Grammy Awards under her belt.

Early in her career, Tia participated in the talent show Star Search in 1985. She did not have much success and was eliminated in the first round. A short time later, her first movie break came. A local producer saw her in a grocery store, and decided to cast her in “Aloha Summer.” Her acting career began.

Tia Carrere started getting offers as a model regularly, and she was cast in the television series “Airwolf.” Soon, she landed a role as Jade Soong, a nursing student in the soap “General Hospital.” After not getting enough screen time and hence, less pay, she tried to audition for the A-Team. This did not go well with the General Hospital producers, and she had to fulfill her contract. Her character was soon written off.

She then landed minor roles in several shows which include “MacGyver” and “Anything but Love.”

Tia Carrere became an overnight sensation and one of the most desirable female celebrities with her role as Cassandra in the movie Wayne’s World. Her solid acting, backed by her singing talents and a perfect body, brought her a lot of fame. She was nominated as the MTV Most Desirable Female and featured in the “50 Most Beautiful People” list of the People Magazine. This movie gave her acting career a big boost, though, it remains her most famous role to date. She reprised her role as Cassandra in the 1993 sequel “Wayne’s World 2”.

She landed some major roles in the following years, as Juno Skinner in True Lies (an Arnold Schwarzenegger film), followed by roles in Rising Sun, the Immortals and High School High. In 1999, she got a breakthrough in her television career. She was cast as Sydney Fox, an archaeology professor in the series “Relic Hunter.” The character became widely popular, and Carrere’s performance received a lot of praise. She also provided her voice in the Disney animated film as Nani. Carrere helped with the writing of her dialogues.

Tia Carrere has contested in two reality TV shows. Her first appearance was in Dancing with the Stars. She finished sixth. She also appeared in The Celebrity Apprentice (fifth season) but was eliminated early.

Tia Carrere dreamed of becoming a singer since childhood. She felt that as an actor you take on different masks, but singing allows you to be your true self. She impressed with her singing talents in the movie “Wayne’s World,” as her character was the lead singer of a rock band. But, in real life, her singing has a softer side. Her songs give a sexy-pop feel, with a hint of mystique.  So far, she has released five albums.

Her first album Dream came out in 1993. It was a hit in the Philippines. It took her fourteen years to release her second album, probably due to her acting career. Two of her albums, Ikena in 2009 and Huana Ke Aloha in 2011, have won Grammy Awards for the Best Hawaiian Album. She also did a show with Daniel Ho, in 2011. The event was a CAPE fundraiser for Japan Relief after a tsunami and earthquake hit the country.

In 2016, Tia Carrere played the role of Mrs. Wells in the film “Showdown in Manila.” She also had the role of a Hawaiian woman in the show Family Guy.

She has had guest appearances in some shows recently, such as Curb Your Enthusiasm, Warehouse 13, and Back to You.

Tia Carrere tried to audition for the A-Team while under contract for the soap General Hospital. Not getting enough screen time and pay, she filed a lawsuit for bankruptcy. She lost the case and had to fulfill the contract.

In 1999, there were rumors of an affair between Carrere and Tie Domi, a former NHL player. Domi’s wife filed for divorce. Carrere and her husband Elie also parted ways.

Carrere has won two Grammy Awards, for the Best Hawaiian Music Album. The first one of these came in 2009 for her album “Ikena.” Two years later, she won another one for her album “Huana Ke Aloha.”

In 1994, she won the Female Star of Tomorrow at the Showest Awards.

She was also nominated twice by MTV for the Most Desired Female (1992) and Best Dance Sequence (1994).

She also received a nomination for the Best Supporting Actress for the movie True lies, at the Saturn Awards in 1995.

She supports the Global Green Plan, the Dreamcatcher Charitable Foundation, and the Wyland Foundation.

She lent her voice to a Filipino documentary, about kids with facial deformities and their inspirational tale.

Tia Carrere has been married twice. She first married Elie Samaha, a real estate entrepreneur and film producer in 1992. Their marriage lasted eight years. They divorced after rumors of an affair between Carrere and Tie Domi, a former NHL player.

She then began a relationship with photojournalist Simon Wakelin. They got married in 2002. The couple welcomed a daughter, named Bianca in 2005. Five years later, however, Carrere filed for divorce, and the couple split in 2010.

Tia Carrere is 5’8’’ tall and has a great physique she has maintained over the years. She is a Christian by religion.

Tia Carrere has two siblings, both sisters. She is currently single and lives in Los Angeles, California.