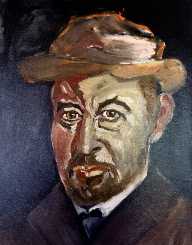 The popular American painter Thomas Eakins was born in Philadelphia, Pennsylvania, the United States on July 24, 1844. His other occupations included photography, fine arts tutor, and sculptor. For 40 years, Thomas had pursued his career as a painter who painted pictures of his friends, family, and significant people. He also imparted the ideals of fine art to many Americans while working as an educator. Thomas legacy still lives on in the American history as the most outstanding, liberal-minded individual.

Thomas Eakins was born and raised in Philadelphia as the firstborn son of Caroline Eakins and Benjamin Eakins. Thomas grew up taking the challenge to become outstanding and popular. At the age of twelve, Thomas Eakins had already become skillful in drawing and had passion for art. He also participated in sports like rowing, swimming, ice skating, sailing, and wrestling. Thomas became a student at Central High School where he studied mechanical drawing. He went to Pennsylvania Academy to study anatomy and drawing in 1861 and later furthered the course at Jefferson Medical College.

Eakins began with painting the ‘Max Schmitt in a Single Scull’ created in 1871. This work attracted attention of the masses because of its uniqueness and had a major sale in 1874. Some of his other works included ‘Home Scene’ (1871), ‘Elizabeth Crowell and her Dog’ (1874), ‘The Chess Players’ (1876). These latter works revealed how people relate with what surrounds them and that which is at their disposal.

In 1872, Thomas came up with what seemed as his major creation known as ‘Kathrin.’ The portrait portrayed Kathrin Crowell together with her kitten in an environment of less light. Thomas and Crowell began a relationship and were engaged for five years but did not end up in marriage. Crowell was diagnosed with meningitis and died in 1879 before the two could walk down the aisle.

Teaching And Resigning From Academy

At Pennsylvania, Thomas became a teacher in Pennsylvania Academy on a voluntary basis. He instructed on number of subjects in the art including illustration, lithography, and decoration apart from portrait art. Thomas also taught anatomy, perspective and fundamental of form and through Thomas Eakins, the academy excelled. It was elevated to a higher level in matters of art and gained recognition by the 1880s.

Eakins was however dismissed from teaching at the Academy and was inclined to comply with a forced resignation in 1886. Thomas was dismissed on the grounds of treating a female student in a sexually related manner. Being that he did not have enough argument to back up his case, Thomas was forced to resign. He went to lecture in other schools including ‘Art Students League of New York,’ ‘The National Academy of Design’ and ‘Cooper Union. Thomas stopped his teaching career in 1898.

Thomas Eakins acquired photographic knowledge and worked with Muybridge in a studio at the University of Pennsylvania. Thomas purchased a camera in 1880 and made some of the drawings like ‘Mending the Net’ from photographs he took. Other works included ‘Arcadia’ (1883), ‘A May Morning in the Park’ and ‘Naked Series, (1883). Through his tenure as a photographer, Thomas had done almost 800 photographs some of which were used in figure study. The portraits he did include ‘The Gross Clinic’ (1875), ‘Centennial Exposition’ (1876) and ‘The Chess Players’ among others.

Thomas Eakins got married in 1884 to Susan Hannah McDowell who was 25 years at the time of marriage. She was once his art student and the two became professional painters and photographers. Thomas died in 1916, June 25 at the age of 71 in Philadelphia and his wife McDowell died later in 1938.