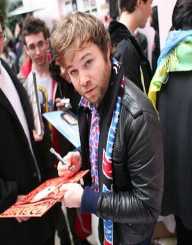 Thomas Bangalter is a DJ or Electronic composer, musician, singer, songwriter, and film director. More famously, he is the other half of the Daft Punk and a member of trio Stardust. He was also part of a duo called Together, and he also performs as a solo artist.

Thomas Bangalter was born in Paris, France on January 3, 1975. He is the son of Daniel Bangalter or Daniel Vanguard, a famous songwriter, and producer for many outstanding performers. He studied high school at Lycée Carnot school in 1987. The family is Jewish but does not practice the religion. Thomas started music at the age of six, beginning with the piano.

He met Guy-Manuel de Homem-Christo (born Guillaume Emmanuel de Homem-Christo), his future partner in Daft Punk in school. Their first song together was after a class trip to Pompeii, inspired by Italian Disco. After that, the duo created the indie band Darling with fellow schoolmate Laurent Brancowitz. A British reviewer Dave Jennings commented that Darlin was ‘daft punky trash’ and the Daft Punk was born.

When Thomas Bangalter and Guy become interested in electronic music, Laurent Brancowitz moved on to another band called Phoenix. In 1993, a year after playing with synthesizers and drum machines, the New Wave single was released. Father Daniel Vangarde played a significant role in advising the teenagers about the recording industry, helping the duo achieve their dreams.

Thomas also released a hit called “Music Sounds Better To You” with Alan Braxe and Benjamin Diamond in 1998, under the group name of Stardust.

During the same year, Daft Punk collaborated with Romanthony to create “One More Time.” The song became the most successful single in 2000 and released the album Discover in 2001. Thomas also performed on the track "Embuscade" in Phoenix's debut album United, as the favorite for Laurent. Thomas also wrote the score for the 2003 film Irreversible.

Teaming up with DJ Falcon as team Together, the duo released Together released the single "So Much Love to Give" in 2003. Daft Punk released Human After All in 2005, and then Alive was live on 2007. Thomas Bangalter was the sound effects director for film Enter the Void, and he wrote the Tron: Legacy score. In 2013 Daft Punk released of Random Access Memories in May.

Thomas Bangalter married French actress Elodie Bouchez, and have two sons Tara-Jay and Roxan. He resided in Beverly Hills, California for his wife’s acting career and his interests. It is reported that he had quit DJing due to a scare after developing tinnitus in 2002.