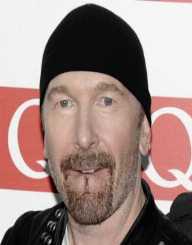 The Edge is a known guitarist of all time for his association with U2 band famous for music such as ‘The Joshua Tree’ and ‘Achtung Baby.' With the band, he has played guitar, keyboards and occasionally served as a co-lyricist. Other than his band performances he has made collaborations with other musicians such as Tina Turner in, ‘Spider-Man: Turn Off the Dark’ and ‘A Clockwork Orange.' Remarkably, he has earned 22 Grammy Awards and has been inducted into the Rock and Roll Hall of Fame.

David Howell Evans, famously known by his stage name, ‘The Edge’ is an English musician born on August 8, 1961, in County of Essex in England, United Kingdom. He is the second born to parents Garvin and Gwenda Evans. He has an older brother called Richard often called Dik and a small sister named Gillian.

During his childhood, he conversed in Welsh and Irish English. Also, due to his interest in music; he received a piano and guitar lessons while he practiced his music alongside Dik, his older brother.

David Howell Evans grew up in Ireland where he enrolled in St. Andrew’s National School and later in 1976; he attended Mount Temple Comprehensive School. While at school, he formed a band that evolved into U2.

The U2 band began performing publicly in 1977 in small venues in Dublin and other places in Ireland. They played their first concert in December 1979, in London and started made extensive tours across the British Isles followed by a release of their album, ‘Boy’ in 1980.

Although in October 1981, David Howell Evans wanted to leave the band for religious reasons, he stayed and wrote a piece of music titled, ‘Sunday Bloody Sunday.’

The Edge supplies backing vocals to the U2 band in songs such as ‘Stuck in a Moment You Can’t Get Out Of,' ‘Sometimes You Can’t Make it Your Own,' ‘and The Fly’ among others. In 1983, the band released a live album and a video release titled, ‘Under a Blood Red Sky’ and ‘Live at Red Rocks: Under a Blood Red Sky.'

Additionally, he sang for Elevation Tour with albums such as, ‘U2 Go Home: Live from Slane Castle’ and ‘Elevation 2001: Live from Boston.’ David Howell Evans also backed up vocals in songs such as ‘Beautiful Day,' ‘New Year’s Day’ and ‘Stay (Faraway, So, Close!) followed by a song, ‘Love is Blindness’ in the film, ‘From the Sky Down.’

In addition to his regular role with the U2 band, The Edge has recorded music with artists such as Tina Turner, Jay-Z, and Rihanna. In 1986, he played alongside Brian Eno and Daniel Lanois, ‘Score to the film Captive’ and released a single ‘Heroine’ sung by a young vocalist, Sinead O’Connor.

In 1987, he co-wrote the song, ‘The Joshua Tree. 'The Edge has played keyboards with the band on several occasions in songs such as, ‘I Fall,' ‘So Cruel,' ‘New Year’s Day’ and ‘Miss Sarajevo.’ He also played both piano and the guitar alternately for ‘Raised by Wolves.' However in a song such as, ‘Original of the Species,' he only played the piano. Occasionally, David Howell Evans plays bass guitar in live performances of the song, ‘40’ where he switches instruments with the bassist Adam Clayton.

The Edge wrote the theme song for season two of the series, ‘The Batman’ and alongside other U2 band members, he wrote the theme of the film, ‘GoldenEye’ in 1995. Also, with Bono, The Edge composed a musical adaptation of ‘Spider-Man.' On July 28, 2011, The Edge released a single titled, ‘Rise Above 1’ featuring Bono. On April 2016, he performed as the first rock artist for the Angiogenesis Foundation in Sistine Chapel.

In 2017, David Howell Evans received a Les Paul Spirit Award from the Les Paul Foundation and has earned 22 Grammy Awards for his outstanding performances.

On July 12, 1983, The Edge married his high school girlfriend, Aislinn O’Sullivan and they have three daughters namely, Hollie, Arran and Blue Angel. However, the couple separated in 1990 and legally divorced in 1996.

In 1993, David Howell Evans dated an American Professional dancer and choreographer, Morleigh Steinberg’ and they have two children, a daughter named Sian and a son Levi. The couple later married in 2002. Recently, The Edge received negative criticism for his efforts to build five luxurious mansions in Malibu, California.

The Rolling Magazine played The Edge at number 38 of the 100 Greatest Guitarist fall time. In 2012, Spin ranked him 13 on their list followed by Rolling Stone which ranked him in their list of Greatest songwriters of all Time, at number 35 in 2015.