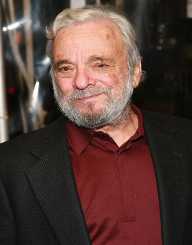 Stephen Sondheim was born on March 22, 1930. He is a composer. He has attracted many audiences through his works.

Stephen Sondheim was born on March 22, 1930, in New York City, United States of America. He was born to Etta Janet who was a fashion designer and Herbert Sondheim who was a dress manufacturer. His love for piano manifested itself since he was young. He attended Fieldston School. He later joined the New York Military Academy. His parents went through a divorce when he was ten years old. He then moved with his mother to Pennsylvania.

Stephen Sondheim learnt musical theatre under songwriter Oscar Hammerstein II. He later attended George School, Pennsylvania where he wrote his first musical. His musical was titled ‘By George!’ In 1946, he graduated from the school. In the same year he joined Williams College where he wrote four musicals. He was guided by Hammerstein. He later won the Hutchinson Prize. After winning the prize he studied composition under composer Milton Babbitt for two years.

After he finished his studies under Milton, Stephen Sondheim wrote for the Television Show ‘Toppers’. He also wrote for the ‘Saturday Night’. In 1956, he wrote lyrics for ‘West Side Story’, the musical. The musical ran for seven hundred and thirty two performances. He became popular with the musical and he began getting many opportunities. He wrote the musicals ‘Gypsy’ and ‘A Funny Thing Happened on the Way to the Forum’ which were a success. He also wrote lyrics and music for musicals such as ‘Do I Hear a Waltz?’, ‘Follies’ and ‘Evening Primrose’.

Stephen Sondheim also conducted the ‘New York Philharmonic’ which was a symphony orchestra. In 1970, he partnered with Producer and director Harold Prince. They worked on the musical ‘Company’ together. They also did six musicals that were directed by Prince. In 1976, he collaborated with librettist John Weidman to write three musicals including ‘Assassins’ and ‘Pacific Overtures’. In 1984, he became partners with director James Lapine. They collaborated to write the musicals ‘Passion’, ‘Into the Woods’ and ‘Sunday in the Park with George’.

In 2003, after a long break, Stephen Sondheim came back to the composing scene with the musical ‘Bounce.’ In 2013, he collaborated with Wynton Marsalis for the show ‘A Bed and A Chair: A New York Love Affair’.

In 1973, Stephen Sondheim received a Grammy Award in the category of Best Score from an Original Cast Album for the musical ‘A Little Night Music.’ In 1985, he received the Pulitzer Prize for Drama together with James Lapine for the musical ‘Sunday in the Park with George.’ In 1990, he won the Academy Award for Best song for his song ‘Sooner or Later.’ In 2008, he received the Special Tony Award for Lifetime Achievement in the Theatre for his contributions to musical theatre.

Stephen Sondheim is a homosexual. He dated dramatist, Peter Jones. He also dated other people during the 1970s and the 1980s. Presently he lives with his partner Jeff Romley. He is eighty seven years old.