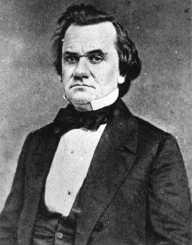 Stephen Arnold Douglass was born 23rd April 1813, to Stephen Douglass and Sarah Fisk. He was born in Vermont, United States, in a town called Brandon. Douglas had one sibling, a sister called Sarah. When he was only an infant, his father died, leaving him to be raised by his mother, with the help of an uncle. His mother remarried in 1830 and moved to New York.

Stephen A. Douglass attended local schools when he was younger. He became an apprentice cabinetmaker as a teenager. He studied at Canandaigua Academy. Douglas wanted to study at Middlebury College as his father had done, but the family could not support his education. Douglas supported himself by teaching, whilst studying law with Walter and Levi Hubbell.

During his time of law studies, he befriended a fellow student by the name of Henry Payne. Payne went on to become a businessman and politician in Cleveland, Ohio and would support Douglas in his future endeavors to become President.

He was admitted to the bar in Jacksonville in 1834, and served as the State’s Attorney of Morgan County, until 1836. Douglas entered politics, and over the ensuing years became the leader of the Illinois Democrats. It was a busy time for Douglas – he was elected to the Illinois House of Representatives, and also became Illinois Secretary of State. Douglas was also appointed Registrar of the Springfield Land Office during this period. When the court expanded in 1841, Stephen A. Douglass was appointed an Associate Justice of the Illinois Supreme Court at the age of just 27.

In 1854, Stephen A. Douglass created the Kansas-Nebraska Act, which caused huge political unrest. Land in Nebraska, west of Missouri, was being settled at the time, and the government was setting up an organization for the territory. Slavery was not permitted in that particular area.

Meanwhile, there was the talk of a railroad being built to California. There were several possible routes being considered, one of which was through Chicago where Douglas owned real estate. Chicago real estate would boom if the railroad went through, so Douglas wanted that to happen.

The relevant politicians would support the railroad through Chicago if Douglas allowed slavery in the Nebraska territories. Douglas chose money over humanity and agreed to the terms.

Although there was strong opposition from the North, Stephen A. Douglass gave a compelling argument that communities should be able to decide amongst themselves whether or not they would have slaves, and Congress should not be deciding on such issues. The vote was carried in support of Douglas’ argument.

Those who were anti-slavery, including Abraham Lincoln at the time, disagreed, and when the next Senate election was held in Illinois in 1855, they put forward another Democrat in opposition to Douglas, named Lyman Trumbull.

Douglas was a candidate for the Democratic Presidential nomination in 1856 but was passed over.

A blow came in 1857 when the US Supreme Court issued what was called the Dred Scott decision. In effect, it said neither Congress nor Territorial legislation had any power to prohibit slavery. This made Douglas’ argument of “popular sovereignty” moot. It put him in a difficult position because whether he agreed or disagreed with the decision, he would lose support from one side or the other, and he needed both for his next Presidential run in 1860.

In 1859, the Illinois legislature would elect a US Senator. It would either be Douglas, or a Republican, who happened to be Lincoln at the time. Douglas tried to avoid Lincoln, but as Douglas traveled the state and made speeches to win the seat for the Democrats, Lincoln followed and would make his speech a day or so after Douglas had been there.

In the end, Stephen A. Douglass agreed to several joint appearances with Lincoln, and these became known later as the Lincoln-Douglas debates.

One of the main issues of contention was slavery. Douglas was pro-slavery, Lincoln wasagainst. After their debates, which at times became quite nasty, Douglas won the seat by a narrow victory.

Stephen A. Douglass became the presidential candidate for the Democrats, in 1860. Slavery versus anti-slavery was a huge issue at the time. Douglas eventually lost the campaign to Lincoln, who became President.

Stephen A. Douglass was married twice. His first marriage was to Martha Martin. The couple married in 1847. They had two sons, and whilst giving birth to their third child, Martin died. The child was a daughter, but unfortunately, she only lived a few weeks after birth.

When Martin’s father died, he left a 2,500-acre cotton plantation with 100 slaves to her. Stephen A. Douglass was appointed the property manager. This situation, of course, was difficult for Douglas who was a Senator in Illinois, which was a free state.

Stephen A. Douglass hired a manager so he could distance himself from the plantation so that his political aspirations would not be affected. He also used 20% of the income from the property to fund his political career. His second marriage was to Adele Cutts in 1856.

Stephen A. Douglass has several places named after him in different states of the United States. He also has a Museum and Visitor Center in his honor in Brandon, Vermont.