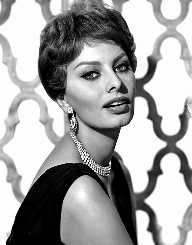 From beauty pageant finalist to an award-winning actress, Italian-born Sophia Loren has made herself known in movies and television.  Her beauty and grace have drawn audiences for decades.

Sophia Loren was born on September 20, 1934, in Rome, Italy.  Her birth name was Sofia Villani Scicolone.  Her father was a construction engineer while her mother was a young actress who resembled Greta Garbo. They never married, and he was never involved in his daughter's life. Sophia Loren and her mother lived with family members in the poorest areas on the Bay of Naples.  The family struggled more when World War II hit Italy.

Sophia Loren gained the lead role in Aida in 1953 and The Gold in Naples in 1954.  By then Sophia Loren became one of the newest Italian actresses.

Sophia Loren continued making movies in Italy from 1954-1957.  Sophia Loren signed with Paramount Pictures in 1958, making her an international star.  The Pride and the Passion was her first role in a Hollywood-produced film.

Sophia Loren co-starred with Frank Sinatra and Cary Grant.  It was also the turning point in her love life when Sophia Loren had to choose between her co-star Cary Grant and Italian film producer Carlo Ponti. It was her role as an Italian mother in World War II that was the pinnacle of her career.  While Sophia Loren was sought after to be the daughter in Two Women, Sophia Loren chose to play the role of the mother. The role resembled her childhood in war-torn Italy.  Sophia Loren won numerous awards including the Best Actress Oscar in 1961.

Sophia Loren continued filming as the star of foreign movies throughout the 1960s.  The Italian, French, and American films received awards including Yesterday, Today, and Tomorrow, the 1963 Oscar winner for Best Foreign Film.

Sophia Loren was nominated for Best Actress in the 1964 film Marriage, Italian Style.  Sophia Loren later co-starred with Marlon Brando in A Countess from Hong Kong.

Sophia Loren continued working.  In 2011, Sophia Loren was the voice of Mama Topolino in the animated Cars 2.  However, she is recognized for her beauty and poise well into her later years.  Sophia Loren makes sure that she portrays realistic women in her films, not just sex symbols.

Sophia Loren married film producer Carlo Ponti in 1957, but their marriage was not official due to legal issues with Ponti's previous marriage.  They remarried in 1966.  The couple has two sons.  They stayed together until his death in 2007.

Sophia Loren was a Goodwill Ambassador for the UN Refugee Agency.  Through her efforts, she made the struggles of Somali refugees in the 1990s known to the world.  She wanted the world to know how they had to live through the war as well as drought and famine.