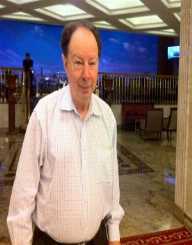 Sidney Altman is a renowned molecular biologist and a noble peace prize winner in Chemistry. He took molecular biology to the next level with his discovery of catalytic properties of RNA. This earned him the Nobel Peace prize in 1989.

Sidney Altman was born on 7th May 1939 as the second son of Ray Arlin and Victor Altman who both hailed from Eastern Europe. His mother, Ray Arlin, was a textile worker while his father, Victor Altman, was a grocer. Sidney's parents were both immigrants. His father came from Ukraine while his mother came from the Russian-Polish border.

Sidney's childhood was not rosy as his parents were poor. His mother stopped working at the textile mill to look after Sidney and his elder brother, leaving his father as the sole bread-winner.

Sidney was interested in sports as a young boy, but his passion for reading overcame all other interests. He read novels and Science books.

Sidney was taught the importance of education and hard work for a brighter future. His poor background did not deter him from pursuing his studies. He was taught the essence of hard work from a young age by his parents.

When Sidney Altman was six years old, the first atomic bomb was successfully exploded in New Mexico. Sidney's love for Science was inspired by this great success and his fascination with the periodic table. Sidney's odds were in his favor because his dad's grocery business grew tremendously. Their lives improved and he was able to pursue his education.

Sidney Altman attended West Hill High School, and after his graduation, he was accepted at Massachusetts Institute of Technology. With Einstein as a role model and his good grades, Sidney's acceptance at MIT was expected. Leaving home was initially not his idea because he wanted to join McGill University in his hometown, Montreal.

Sidney could not turn down an offer from such a prestigious institution and he left Canada for the United States.

In his final year, Sidney Altman took an introductory course in molecular biology. He gained knowledge of molecular genetics and nucleic acids which lay a foundation for his great career. He enjoyed sports since childhood, and it was not a surprise that he joined the Ice-hockey team at MIT.

The institution's Medical School offered Sidney an opportunity to work as a research assistant as he studied Biophysics. Sidney worked alongside Leonard Lerman on Acridine and replication of the of the T4  DNA bacteriophage.

Sidney Altman was awarded his Ph.D. in Biophysics in 1967. He left for Harvard after briefly working as a researcher at Vanderbilt University.

In 1967, Sidney joined Harvard's renowned Biochemist Matthew Meselson, where he continued his study of the T4 bacteriophage. In 1969, Sidney left for Cambridge University to work as a researcher. He worked alongside Sydney Brenner of South Africa and Francis Crick.

In 1971, Sidney Altman secured a post at Yale University as an Assistant Professor and returned to the United States.

Sidney Altman quickly moved up the career ladder and became a full Professor in 1980. In 1983, Sidney served as the chairman of the Department of Biology. In 1985, Sidney was named the Dean of Yale College, a position he served for four years. His passion for molecular biology led him to return to his former position as a full-time Professor in 1989.

Sidney is currently the Sterling Professor of Developmental, Cellular and Molecular Biology and Chemist.

Scientists had always thought that RNA was a passive carrier of genetic codes. Sidney discovered that RNA has catalytic properties. His investigation into RNA and in particular, transfer RNA led him to isolate a precursor molecule. This molecule led to the synthesis of tRNA and enzyme RNase P was discovered.

It is during RNase P purification that Sidney discovered a segment of RNA in the enzyme.

This new idea was not welcomed by the Science community as it rubbished previous works. Sidney faced strong objection. He repeated his experiment and got the same results.

Sidney waited for five years to have his work published. This period saw the closure of his laboratory. He was resilient, a character he took from his parents who worked hard until they succeeded. His mother arrived in Canada with little knowledge of the English Language. She enrolled in elementary school and learned the language.

Sidney's work was later published, and he was no longer isolated. He became respectable and a notable figure in the Science community.

In 1978, one of Sidney's graduate students conducted an experiment that showed enzyme RNase P contained partial RNA. This discovery wrote off the joint notion that enzymes were made up of proteins.

The RNA catalyst discovery was complimented by conclusions from Thomas Cech's independent study a year later. These two great Scientists independently demonstrated that nucleic acids act as both enzymes and genetic codes.

After discovering that RNA could reorganize themselves, nucleic acids have been said to be the beginning of life. Sidney's great work has been applied in modern Medicine, and continuous research could lead to a possible cure for viral infections.

The highlight of Sidney Altman's career was wining the Nobel Peace Prize in 1989 which he shared with Thomas Cech. A year earlier, Sidney was named a fellow of the American Academy of Arts and Science.

In the same year, Sidney received the Rosenstiel Award. In 1991, Sidney was chosen to present the DeVane lecture series on the topic 'Understanding Life in the Laboratory' at Yale University.

Sidney prides himself in being a member of the National Academy of Sciences and the Genetic Society of America.

Sidney Altman is today applauded for making one of the greatest discoveries in the history of Science. His contribution to Science has put his name on the top Scientists and a role model among aspiring molecular biologists.

Sidney married the love of his life Ann Korner in 1972. Two years later, they were blessed with their son Daniel. In 1977, Sidney and Ann welcomed their daughter Leah. He has attributed his success to his wife and children. He describes his beloved wife as a colleague and friend. He has been and is still a devoted father and husband.

Sidney Altman has duo citizenship in both Canada and USA. He attained his US citizenship in 1984. He is 77 years old. Sidney still holds on to his Canadian citizenship and thinks that Montreal is a breath-taking city.

Sidney Altman is a believer in the Jewish faith. His mother, Ray Arvin immigrated to Canada to escape religious persecution. She instilled her religious beliefs into her family.

When away from the lab, Sidney Altman enjoys watching sports, a hobby he has held on since his boyhood. He is a great fan of the Montreal Canadiens, his hometown team.