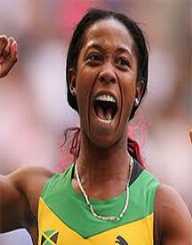 Shelly-Ann Fraser-Pryce was born on December 27th, in 1986. She is a famous Jamaican track and field sprinter. She rose to the limelight in her sports career during the 2008 Olympic Games.

At the time, she emerged as the first ever Caribbean woman to bag home a gold medal in Olympic competitions. Later, in 2012, she defended her title-winning another gold medal in 100m race. As a result, she earned credits for being the third woman to win two gold medals consecutively in 2008 and 2012.

Fraser-Pryce has also won a gold medal while competing in the IAAF World Championships. She was later nicknamed Pocket Rocket due to her small frame and fast speeds. Fraser-Pryce is ranked as the fourth fastest female sprinters.

Fraser-Pryce went to Wolmer’s High School for Girls located in Kingston. She honed her talent while in school as she participated in junior competitions. She first had a taste of success while competing in Jamaican Schools Championships. She was 16 years old when she won the 100m race in the junior competition.

Shelly-Ann Fraser-Pryce trained alongside Asafa Powell, a former world record holder in 100m men’s race. After winning gold during the 2008 Beijing Olympics, Fraser earned tremendous acclaim as she was the first Jamaican woman to win the medal. She advanced to the second round of the race after a record of 11.35. After that, she reduced the time to 11.06 in the second heat where she emerged first. She also became first in the semifinals with a time of 11.00 seconds.

In the finals, she won the race with a record of 10.78 seconds. Her Jamaican rivals Kerron Stewart and Sherone Simpson followed her. They were bestowed with silver medals.

Fraser-Pryce again hit the headlines in 2009 after winning the 100m race with a record time of 10.88 seconds. As a result, she qualified to compete at the 2009 World Championships. She later competed at the 2012 London Olympics. Here, she became first in both 100m and 200m trials in Jam.

In the major competitions, Fraser defended her title bagging home a gold medal with a record of 10.75 seconds. This record marked her as the second fastest woman in the 100m competition. Carmelita Jeter came in second.

Fraser-Pryce is a Christian. In early 2011, she wedded Jason Pryce. As a result, she adopted the name Fraser-Pryce. The two welcomed their first born child in 2017.