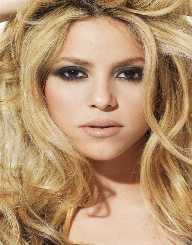 Shakira is a Colombian pop singer who is best known for singing the 2010 FIFA World Cup anthem, Waka Waka (Time for Africa) and her number one hit; Hips Don’t Lie.

Born Shakira Isabel Mebarak Ripoll in Barranquilla, Colombia on 2 February 1977, the name Shakira comes from the Arabic for grateful and is due to her father’s Lebanese heritage. Shakira was the only child born to Nidia Ripoll Torrado and William Mebarak Chadid. From an early age, she was artistically inclined and wrote her first poem the ‘Crystal Rose’ at the age of four. Throughout her childhood, she would write poetry and eventually these early poems would evolve into songs. Her trademark Middle Eastern style comes from being brought to a Middle Eastern restaurant by her father as a child and discovering belly dancing.

Shakira was also made intensely aware of the poverty in her local area by her father, and this fostered a deep social conscious in her. From the age of ten, Shakira began performing in her neighbourhood. In school, she was known as the ‘belly dance girl’ and would perform new dance moves and songs every Friday. Shakira performed for some Sony Columbia executives and was signed to a contract for three albums at the age of thirteen.

In 1990, Shakira released her first album, Magia, it gained her fame in Colombia but was a commercial flop. A second album, Peligro, was released in 1993, but Shakira was unhappy with the finished product and refused to market the album. Again the album was commercially unsuccessful and Shakira stopped recording music to focus on her school work. 1996 would see Shakira achieve a breakthrough. Her third album Pies Descaloz would debut at number one in eight Latin American countries and achieved platinum status. Shakira produced her fourth studio album, Dónde Estánlos Ladrones?, personally. The album reached the top of the U.S Latin Charts and would ultimately sell seven million copies.

Shakira received her first Grammy nomination in 1999 for best Latin Rock/Alternative Album. Later that year she would appear on MTV Unplugged and the performance was turned into a live album. The album was a huge success and won the 2001 Grammy for best Latin Pop Album. 2001 saw Shakira release her first English album, Laundry Service, which featured the hit single Whenever Wherever. Both were global successes and propelled Shakira to international fame. Laundry Service finished 2002 as the bestselling album of the year with 20 million copies sold.

Fijación Oral, Vol.1, was Shakira’s sixth studio album and exceeded all expectations with sales outstripping shipments in a number of Latin American countries. The English follow up album, Oral Fixation, Vol. 2, did not enjoy the same success but did contain the single Hips Don’t Lie. Hips Don’t Lie became the bestselling song of the 21st century and reached number one in 55 countries including the U.S. In 2007, Shakira dueted with Beyoncé on the track Beautiful Liar. The song reached number one in the U.K and received a Grammy nomination.

Shakira signed a 300 million dollar ten year tour contract in 2008. She was listed on Forbes rich list for the first time. She performed at Barack Obama’s presidential inauguration in 2009. The same year she released a new album and single both titled She Wolf. The album achieved underwhelming sales, but the single charted well. Shakira recorded Waka Waka (Time For Africa) as the theme song for the 2010 FIFA World Cup in South Africa, it became the bestselling World Cup song of all time.

Shakira had previously sung the 2006 World Cup song and provided the theme to the 2014 World Cup in Brazil. In 2012, she became a judge on the TV show The Voice. 2014 brought the release of Shakira’s tenth studio album, Shakira, which featured the single Can’t Remember to Forget You.

Shakira has been nominated for twenty Latin Grammys of which she has won ten. She also has two Grammys. In 2001 she won Best Latin Pop Album for MTV Unplugged and in Fijacion Oral Vol1 won Best Latin Rock/Alternative Album. She has also been nominated for another three Grammys. Shakira has sold over seventy million records worldwide, making her the bestselling Colombian artist of all time. Hips Don’t Lie the most played song in one week in American radio history. Shakira is the only South American to have a U.S, UK and Australian number one.

Shakira was a long-time partner of Antonio de la Rúa, and the two were together from 2000 to 2011. De la Rúa sued Shakira in 2013 over the work he did as her business manager, but an L.A court dismissed the case. Shakira has two children with her current partner Gerard Pique. The singer and Barcelona defender’s children are named, Milan Pique Mebarak and Sasha Pique Mebarak. Shakira has released seven platinum selling albums, and fifteen platinum rated singles. Shakira is the only artist to provide the songs for three World Cups.

Shakira’s foundation ‘Pies Descalzos Foundation’ (Barefoot Foundation) provides education to the poor and displaced of Colombia. The foundation built two schools in Shakira’s home neighbourhood in 2004. Since 2011 the foundation has cooperated with F.C Barcelona. Shakira is a UNICEF goodwill ambassador.

In addition to singing Shakira has appeared on TV and in movies as an actress. Her first acting role was in a Colombian TV Series ‘The Oasis’ in 1994. The show was based on the Armero Tragedy, where 20,000 people were killed by landslides caused by a volcanic eruption in Colombia. She has also appeared as herself in, Taina, Ugly Betty, Wizards of Waverly Place and Dreamland. Shakira provided the voice of Gazelle in the 2016 movie Zootopia. Shakira also has a beauty line, ‘S by Shakira’, which has released many perfumes with parent company Puig.