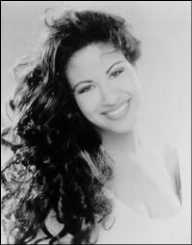 Selena Quintanilla was an American singer who is best known for her Tejano and Latin music and her murder in 1995.

Selena Quintanilla was born in Lake Jackson, Texas on 16 April 1971. Selena was the youngest child of Marcella Ofelia Quintanilla and Abraham Quintanilla. Her father had been a musician, and he noticed Selena’s talent at an early age, and she would perform at his restaurant with her siblings.

Her father withdrew Selena from school to push her to perform more. Although this Selena was able to gain a high school diploma and attend Louisiana State University. Her father pushed her to perform Spanish language songs and Tejano music. Tejano was a style of music developed by Mexican-Americans in Texas.

Selena Quintanilla was not a native Spanish speaker and had to be thought by her father during recordings. The family became dependent on Selena’s music for income after her father lost his restaurant and was bankrupted. Before turning eighteen, Selena had released six LP records. She struggled to get major bookings due to her age, but became a big name in Tejano music and won Female Vocalist of the Year at the 1987 Tejano Music Awards. She would win the Female Vocalist of the Year award every year for the rest of her life.

Selena Quintanilla had been performing and recording at a young age, but her first record deal with a major label came in 1989. Selena signed with EMI’s new Latin music label EMI Latin. Selena wanted to release English language tracks, but the record label did not feel she had the fan base to move away from Spanish tracks. Instead she released a self-titled album in 1989. She also signed a deal with Coca-Cola in 1989 to be a spokesperson for the brand. Selena’s second album VenConmigo went platinum in Mexico.

Selena Quintanilla enjoyed her first major American chart success when she dueted with Álvaro Torres on the song Buenos Amigos, which reached number one on the Billboard Latin charts. The exposure from the song expanded Selena’s fame outside of Texas and Mexico, and she began touring the United States.

Selena’s fourth album, Entre a MiMundo, was released in 1992 and was certified platinum in America and was also her bestselling album in Mexico to date. Como la Flor, a single from the album peaked at number six in the Billboard Latin music charts. She released a live album, Live!, which was both a commercial and critical success. As her fame grew, Selena began to branch into other works. She made her acting debut in a Mexican show, Dos Mujeres, Un Camino. She appeared in the 1995 film, Don Juan DeMarco, which featured Marlon Brando and Johnny Depp.

Selena Quintanilla also became a fashion designer in 1994. She opened two boutiques in Texas which sold her clothing line and also had onsite beauty salons. The boutiques were a huge success earning Selena millions of dollars. Selena released a fourth studio album in 1994.

Amor Prohibido reached number one on the Billboard Latin albums chart and stayed in the top five for nearly a year. It was one of the bestselling Latin albums of all time and is the bestselling Tejano album of all time. The success of the album convinced her label that it was time for an English-Spanish crossover album and Selena began work on Dreaming of You.

Selena Quintanillawas shot by Yolanda Saldívar and died of her wounds on 31 March 1995. Saldivar was a nurse from San Antonio, Texas. Saldivar had attempted to start an official fan club for Tejano singer Shelly Lares but was rebuffed. She then approached Selena’s father who gave her permission to start a Selena fan club. Under her presidency, the Selena fan club in San Antonio had reached over five thousand members.

Selena Quintanilla went to collect the records from Saldivar in a motel in Corpus Christi, Texas. Saldivar pulled a gun on Selena and shot her in the left shoulder as she attempted to flee. Selena badly wounded fled finding help in the motel lobby. She named Saldivar as her shooter and collapsed.

Selena died on the operating table from her wounds. Saldivar was arrested after a stand-off with the FBI and was sentenced to life imprisonment. The death of Selena saw a huge outpouring of grief from the Hispanic and Latin music communities. 16 April, Selena’s birthday, was declared Selena day in 1995 by Texas governor, George W Bush.

Dreaming of You was released in 1995 and debuted at number one on the Billboard charts. It was Selena’s bestselling work and went 35 times platinum in America. A film of her life, Selena, was released in 1997. Originally Selma Hayek was cast for the title role, but Jennifer Lopez eventually portrayed Selena Quintanilla. The film was a commercial and critical success and is credited with being Lopez’ acting breakthrough. Two musicals based on her career were also produced. Selena a Broadway musical launched in 1999 and 2000 Selena Forever toured America.

Selena Quintanilla was involved with some charities and in particular children’s charities. She helped Toys for Tots and DARE and performed some charity concerts for disaster relief and AIDS awareness. She also made numerous speaking appearances at schools advocating the importance of education.