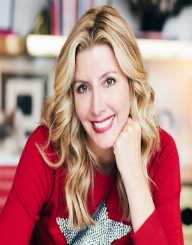 Sara Blakely is a successful business entrepreneur and the founder of Spanx a famous shapewear product line dealing with pants and Leggings in Atlanta, Georgia. Forbes listed her as the 93rd most a powerful woman in 2014 while the Times Magazine named her among the 100 influential people in the world in 2012.

Sara Blakely is a daughter of a trial attorney and an artist, born on February 27, 1971, in Clearwater, Florida. She is the firstborn with a younger brother, Ford. Blakely enrolled to Clearwater High School and graduated with a communication degree from the University of Florida.

Blakely worked for three months at Walt Disney World in Orlando, Florida and occasionally as a stand-up comedian. Afterwards, she accepted a job with an office supply company where she sold max machines in Danka. Due to her successful sales, she earned her promotion to national sales trainer at the age of 25.

During her stay in Florida, she disliked the hot climate and the pantyhose she was forced to wear and the appearance of her foot when she wore open-toed shoes. Later, during a private party, she experimented by cutting the feet of the pantyhose while dressed in a pair of slacks and although the pantyhose continually rolled up her legs, she accomplished getting her desired outcome.

Blakely relocated to Georgia, Atlanta at the age of 27, she continued to research and work on her hosiery idea. In efforts to present her plan; she drove to North Carolina where most of America's hosiery are found but was turned away by every representative she met because they were used to dealing with established companies. However, two weeks after she stayed in North Carolina, she received a call from a male mill operator who offered to support her idea because his daughters had endorsed the concept.

Blakely finished her first product within a year and tested it with her mother and her friends. Her outcome was different from other industries hosiery products because she used different waistbands for various sizes of consumers. Before submitting her product, Blakely used her patent attorney to finalize her application to the United States Patent and Trademark Office (USPTO).

After submission of the application, she started packaging her product, coloring it red while using an illustration of three good looking women. In efforts to identify a brand name, Blakely bought ten different products from various products brands that would act as a guide but failed to find a satisfying title within a year and a half.

Seeking ideas for her brand famous names such as coca cola and Kodak, and advice from comedians, Blakely decided to settle on the name Spanx derived from Spanks where she replaced the ‘k’ with an ‘x.' She then purchased a trademark on USPTO website and presented the advantage of her innovation before a representative of Neiman Marcus Group. Due to that meeting, Blakely managed to sell her product to seven stores in Neiman Marcus. She then shifted her attention to retail shops other than hosiery sections.

She also sent her products to Oprah Winfrey’s television with a gift card that explained her innovation. Winfrey liked her product, and in November 2000, she named it her favorite product which increased the popularity and sales of the product as well as Blakely’s recognition. In 2001, she signed a contract with QVC, home shipping channel which increased her sales gradually.

In 2005, Blakely contested on ‘The Rebel Billionaire’ and emerged second and later starred as a judge on the ABC reality series ‘American Investor.’ Blakely launched 'The Sara Blakely Foundation' which funds scholarships for young women in 2006. Since its launching, the foundation has supported the Community and Individual Development in South Africa.

In October 2013, she stated that her ambition is to design the world’s most comfortable heel before her retirement. Forbes listed Blakely as the 93rd most powerful woman in the world in 2014.

Blakely married Jesse Itzler, in 2008 at Gasparilla Inn and Club in Florida, the U.S that featured a surprise performance by the musician, Oliver Newton-John. Her husband is the co-founder of Marquis Jet, and the couple has four children.