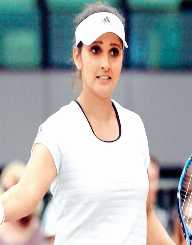 Sania Mirza is an Indian Tennis player. She is the most successful tennis player in India and also one of the highest paid athletes in the country. She’s on Time’s 100 most influential people in 2016. She is the first Indian woman to win the Women’s Tennis Association (WTA) title.

Sania Mirza was born in Maharastra, Mumbai on November 15, 1986, to Imran, a builder, and Naseema who was working in a printing press. They moved to Hyderabad after her birth. She started playing Tennis at age six and hasn’t stopped since. Early on, her coach was her dad, but he later relinquished the job to Roger Anderson. She went to Nasr School, Hyderabad and St. Mary’s College, Hyderabad.

In April 2001, Sania Mirza was 15, and she played for the International Tennis Foundation and got to the Semifinals. In 2002, she got to quarterfinals in U. S Open Girls tournament. As a junior, she won 10 singles and 13 doubles under the tutelage of her father. She also won a bronze medal for mixed doubles in the Asian Games in Busan in 2002.

Sania went into professional tennis in 2003 winning the 2003 Wimbledon Championship Girls Double title alongside Alisa Kleybanova. That same year, she got to Semifinals of the U. S Open Girls tournament. In 2003, she got a wildcard to play at her first ever WTA tournament at the AP Hyderabad Open, but she lost to Australia’s Eve Dominikovic. She won three straight matches in the Federation Cup. She also won 4 Gold medals in the 2003 Afro-Asian games in Hyderabad.

At the 2004 AP tournament, Sania Mirza won her first ever Doubles title at the event along with Liezel Huber. She received an invitation to play at the Prix SAR La Princesse Lalla Meryem in Morocco which she lost to Emilie Loit. She won 6 ITF Singles matches in 2004 as well.

In 2005, Sania was in the Australia Open, and she played against Cindy Watson in the first round and Petra Mandula in the second and won both matches but lost the third to Serena Williams who won the game. In February of the same year, she became the first ever Indian woman to win the WTA title.

Sania Mirza went on to the 2005 Dubai Tennis Championship where she defeated the U. S Open champion and eventually finished in second place in the 2005 Wimbledon Championships.  In August, she became the first Indian woman to reach the fourth place in the Grand Slam where she lost to Maria Sharapova. At the Japan Open, she came in second place after losing to Tatiana Golovin. She was eventually named 2005 Newcomer of the Year.

In 2006, Sania was the first ever female Indian to be seeded in a Grand Slam event and although she came second in the Singles category. She and Leizer Hubert came together in the Doubles and won. She lost the U. S Open that year to Francesca Schiavone. At the Sunfeast Open, she lost to Martha Hingis but won the Doubles title once again with Leizer Huber. In 2007, she finished eighth overall in the U. S Open Series, and she got her highest ever Singles ranking as No 27 in the world. She also won four Doubles titles in the same year.

In 2008, at the Summer Olympics in Beijing, Sania Mirza was removed from Singles division due to an injury on her right wrist. That year she had a lot of wrist injuries that made her unable to participate in many of the matches that year. 2009 saw her partnering with Francesca Schiavone at the Moorilla Hobart International Doubles event where they got to quarterfinals. 2009 also brought her first ever Grand Slam title along with Mahesh Bhupathi.

In 2011, Sania Mirza was in the top 60 singles ranking. She won and lost several matches, but due to the right wrist injury, she was stuck to playing doubles. In 2015, Sania and Swiss legend Martina Hingis won the 2015 Wimbledon Championships. She also won her first Grand Slam title in Women’s Doubles. They ended 2015 on a hot streak with 22 undefeated winnings consecutively securing her as Number 1 in 2015 with a total of 10 WTA titles and 2 Grand Slams. She maintained her No 1 spot in 2016 as well.

Sania Mirza was engaged to an old friend, Sohrab Mirza but the wedding was called off soon after. She eventually married Pakistani Cricketer Shoaib Malik in a Muslim ceremony in 2010. The wedding was controversial as a woman had accused the cricketer of marrying her and thus had to divorce her first. This resulted in a media circus before the marriage.

Sania was declared unfit to be a representative of an Indian state after being named Telangana State’s Ambassador because her husband is Pakistani. She has however continued to claim India as her homeland.

In 2016, Sanjay Manjrekar former India Cricketer and commentator tried to undermine her achievements on Twitter, but she did not let him get away with it. She sent him articles to read. She published her autobiography, Ace Against Odds in 2016.

Sania Mirza is a figure to reckon with in India. But beyond she has been recognized by the United Nations for her efforts towards gender equality. In late 2012, due to her suggestion, the prize money for the Fenesta Open National Tennis Championship was increased, and steps were taken to ensure all National Tournaments prize money was equal in the male and female categories

Sania was announced in 2014 as United Nations’ goodwill ambassador for South Asia.

She has also received some government awards for using the spotlight granted to her by her position to draw attention to social issues especially concerning women and children. She has earned the honors of Padma Shri and the Arjuna awards from the government of India. She has also been conferred with Padma Bhushan in 2016 and Rajiv Gandhi Khel Ratna award in 2015.

On December 11, 2008, Sania Mirza was given an honorary degree of Doctor of Letters from the MGR Educational and Research Institute University in Chennai.