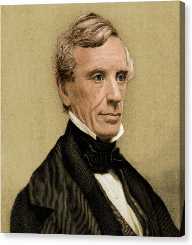 Samuel Finley Breese Morse was born 27th April 1791, to Jedidiah and Elizabeth Morse. He was born in Charlestown, Massachusetts, in the United States. Morse was the eldest in his family, the son of a geographer and a Calvinist pastor.

Morse studied at Philips Academy in Massachusetts, and he then went to Yale College. His subjects included mathematics, religious philosophy, and the science of horses. He graduated in 1810.

While at college, Samuel F. B. Morse painted to pay for his tuition. One of his first notable works was Landing of the Pilgrims. A fellow artist, Washington Allston, saw the painting. As a result, he organized with Morse's father to take Morse to England for a three-year trip. The trip was to study art and meet Benjamin West, a fellow artist.

Arriving in 1811, Morse studied under Allston. Morse enrolled at the Royal Academy later that year because his talent was so good. His next major work was Dying Hercules, which became a masterpiece.

In 1815, Samuel F. B. Morse returned to America to take up painting as a full-time career. Over the next ten years, Morse painted many works and completed several painting commissions.

His commissioned orders declined during the Panic of 1819, but he still received requests. He painted socialites and wealthy families, and the President, James Monroe. Morse also painted The House of Representatives in 1821. The Marquis de Lafayette from France was another subject that Morse painted.

In 1826, Morse co-founded the National Academy of Design in New York City. He was the President until 1845. He traveled to Europe in 1830 and spent three years visiting several countries to study painting.

In 1825, Samuel F. B. Morse was in Washington, D.C., completing his commission of Lafayette. His father sent a letter to let Morse know his wife was very sick. By the time Morse got back to New Haven, his wife had died.

Morse was distraught that he hadn't known about his wife being sick until some days later. The situation made him determined to come up with a method for communicating quickly over long distances. Morse developed the single-wire telegraph after observing experiments with an electromagnet.

At the same time as Morse was working on his telegraph, William Cooke and Professor Charles Wheatstone were working on theirs. Although they started after Morse, because they had far greater financial resources, they finished earlier.

In May 1837, Cooke and Wheatstone had provided a working machine to the Great Western Railway.

Samuel F. B. Morse spent years defending his invention. He believed Cooke and Wheatstone were unprincipled thieves and that he, Morse, was the single inventor of the electromagnetic telegraph.

Morse applied for a patent of his invention. The telegraphic language created by Morse became known as Morse code. It is still the standard in modern times for transmitting data.

Samuel F. B. Morse had help from Professor Leonard Gale and Alfred Vail in developing the invention. They worked out how to send the message over long distances.

Morse sought federal funding, but he was unsuccessful. He traveled to Europe but found that Cooke and Wheatstone were already there and had taken the interest of investors.

When he went back to America, Morse found a congressman who agreed to give him the financial backing he needed. After a successful demonstration in 1842, Congress put aside $30,000 in 1843 to have a telegraph line built from Washington, D.C., to Baltimore.

In May 1844, an important message traveled over the wire and successfully arrived at the other end. Telegraph lines operated over twelve thousand miles by the end of the next six years.

In 1847, Morse received his patent for the telegraph. His telegraph machine became the official machine throughout Europe in 1851.

Samuel F. B. Morse continually contested his inventions despite having his patent. The Supreme Court upheld some of his claims but ignored others. The Supreme Court awarded Morse the entitlement to hold the patent monopoly of his system.

European countries made a payment to Morse of 400,000 French francs. They believed he was entitled to payment as his machines were in use throughout the continent.

In his last years, Morse donated a lot of his money to charity. He lived a very comfortable life, despite not making much in royalties for the use of his inventions. He had seven patents registered in his name.

Among his many awards and honors, Samuel F. B. Morse had the following:

In 1818, Samuel F. B. Morse married Lucretia Pickering Walker. Walker unexpectedly died in 1825. The couple had three children. In 1848, Morse married for a second time. His new wife was Sarah Elizabeth Griswold, and they had four children.