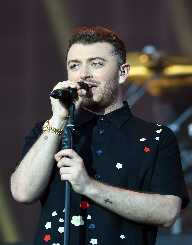 A young sensation that has rocked the music charts of the UK and the world, Sam Smith is a rock and pop singer of extraordinary gifts. His powerful voice has earned him wide fame and recognition in a very short span of time.  Starting out in 2012, with a hit single ‘Latch,’ Smith has since then, continued to make great music and earn many Grammy awards.

Sam Smith was born on May 19, 1992, in London, England. His father looks after the household while his mother works in a bank.

After he displayed a lot of potential at the young age of 15, Sam Smith's mother became his promoter. His first significant work came in 2012 with the single ‘Latch’ from the band, Disclosure. Smith’s voice resonated with the listeners, and the song became an instant hit.

Now well-known on the music scene, Sam Smith grabbed the opportunity with both hands and released his album which had considerable success.

After gaining huge success with ‘Latch,’ Sam Smith released his album ‘In the Lonely Hour.’ The album became one of the biggest hits of the year. The single ‘Stay with me’ was named the Song of the Year in 2015. This album brought him four Grammy Awards – Best New Artist, Best Pop Vocal Album, Record of the Year, and Song of the year.

With this album, his popularity soared, and Sam Smith became one of the rising stars not only in the UK but all over the world.

Before this, Sam Smith also lent his voice to the song ‘La La La’ from Naughty Boys. The song reached the #1 spot in the UK Charts. He also sang the lead vocals for the song ‘Omen’ by Disclosure, the band who launched his career. His musical exploits earned him a song in the James Bond Movie Spectre. He sang and co-wrote ‘Writings on the Wall.’ The song was a major hit, reaching #1 in the UK.

As he is young, there’s a lot more to come from this incredibly talented artist in the years to come.

Sam Smith has received numerous awards in his short but spectacular career so far. He won four academy awards for his album ‘In the Lonely Hour.’ In 2016, he was also awarded a Golden Globe award and an Academy award. He dedicated his Oscar to the gay community around the world, mistakenly quoting himself to be the first gay man ever to win an Oscar. However, that doesn’t diminish his achievements by any margin.

Sam Smith is a feminist at heart. He has openly accepted that he is gay, and was in a relationship with actor Jonathan Zeizel. The two separated after a short period of dating, which had a negative impact on Smith. However, he found his way back to normal life through his music.