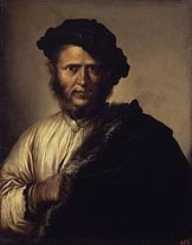 Salvatore Rosa was born on June 20, 1615. He was an Indian painter. He is famously known for his extravagant and unorthodox style of painting. He was interested in writing, poetry, music, and acting. Salvatore Rosa showed a love for art from a very young age.

Salvatore Rosa was born in June 20, 1615 in Arenella, Naples. He was born to Giulia Greca Rosa who was a member of the Greek families of Sicily and Vito Antonio de Rosa who was a land surveyor. He was interested in art from a young age but his father pressurized him to become a lawyer or a priest. He attended Somaschi Fathers with the demand of his father to study priesthood. Salvatore Rosa later started working with his uncle in learning about painting. He also took lessons from his brother in law who was a painter. He later apprenticed with Aniello Falcone. All this he did without the knowledge of his father since he was independent minded. When He was seventeen, his father dies, and the family went into serious financial constraints.

Under the apprenticeship of Falcone, Salvatore Rosa assisted Falcone in finishing his battle piece canvasses. In 1634, Rosa moved to Rome after Lanfranco noticed his potential. He stayed in Rome for two years, that is, until 1936. In 1936, he returned to Naples where he started painting the landscapes of Naples which were wild and haunting. In 1638, he went back to Rome where Salvatore Rosa painted his first masterpiece ‘Incredulity of Thomas’. He made the painting for the Chiesa Santa Maria della Morte which was located in Viterbo. He was not only interested in painting but also in acting, music, poetry, etching, and writing. He gained popularity as an actor when he wrote and acted in a Roman Carnival Play.

Salvatore Rosa was however not free from enemies as he criticized techniques that were applied by other people. In 1639, he moved to Florence where he lived for a long time and sponsored painters, playwrights and poets. Salvatore Rosa continued to paint and write satires in poetry, painting, war, and music. In 1649, he moved back to Rome where he began large-scale painting. He had his own way of painting that did not conform with paintings of other painters. Some of his paintings include ‘Justice Quitting the Earth and the Wheel of Fortune,’ ‘The Death of Socrates,’ ‘Regulus in the Spiked Cast’ and ‘Democritus amid the Tombs’ among others. His art of painting influenced the development of romanticism across Europe. He painted mythological scenes, but he also painted historical and biblical scenes. Salvatore Rosa etched in his later years before he died.

While he was in Florence, he started a long-term relationship with Lucrezia with whom he had two children. Salvatore Rosa married Lucrezia on his deathbed in 1673. He died on March 15, 1673, of dropsy. He died at the age of fifty seven.