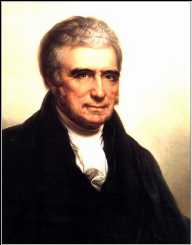 American politician Salmon P. Chase was born on the 13 January 1808  in Cornish, New Hampshire. His father died when he was young, and he was brought up an uncle, Philander Chase, an Episcopalian religious leader.

Salmon P. Chase graduated from Dartmouth College in 1826. He relocated to Royalton, Vermont where he taught at the Royalton Academy before moving to the District of Columbia where he studied law under the U.S. Attorney General William Wirt.

Salmon P. Chase was admitted to the bar in 1929 and for a time worked with the American Sunday School Union. During his time there he defended many fugitive slaves and got involved with the anti-slavery movement. After the Cincinnati Riots of 1836, he advocated improving laws relating to fugitive slaves.

Salmon P. Chase entered political life in the early 1840s when he was elected to the Cincinnati City Council. At the time he was a member of the Whig party but left in 1841 to join the emerging Liberty Party. He subsequently became the leader of the Liberty Party. He drafted the party’s national platform and in 1845, the Liberty address. He also got involved with the Free-Soil movement, and in 1848 he supported Van Buren’s nomination for President. Then in 1849, he was elected as a U.S. senator representing Ohio. (1849-1853).

As a senator, Salmon P. Chase continued with his anti-slavery initiatives. He opposed the Kansas-Nebraska Act as well as the Compromise of 1850. As the Whig Party was losing ground, Chase he worked towards forming the Republic Party with the anti-slavery Democrats.

During four years as governor of Ohio, Salmon P. Chase pushed for prison reform, rights for women and public education.

Salmon P. Chase was involved in setting up the National Bank Act, introducing the greenback and other currency. During the Civil War, he was involved in the sale of government bonds to help the government fund the war. He was also responsible for setting up the Internal Revenue Service in the United States. His image appeared on the first US dollar bill which was issued in 1862.

He ran to be the Republican presidential nominee in 1860 but lost out to Abraham Lincoln. Abraham Lincoln appointed him as Secretary of the Treasury (March 1861-June 1864). One of his tasks was to design the greenback, the first US federal currency note.

Chief Justice Of The Supreme Court

From December 1864 until his death, Salmon P. Chase was the chief justice of the U.S. Supreme Court. During his time he sat on the bench presiding over the impeachment trial of President Andrew Johnson (1868).

In 1868 Salmon P. Chase had another attempt at running as a presidential candidate but was unsuccessful. Then in 1872 he helped found the Liberal Republican Party. Again, he tried for a presidential nomination without success.

Also in 1968, Salmon P. Chase presided as Chief Justice at the impeachment trial of President Andrew Johnson. The same year he failed to secure the Democratic presidential nomination.

Salmon P. Chase was married three times. He married Catherine Garmis in 1834, and she died in childbirth the following year. In 1839 he married Eliza Smith who died in 1845. They had three children together. His third wife, whom he married in 1846, was Sarah Bella Ludlow who died in 1852.

He bought the Washington D.C. property Edgewood in 1869.

His image appeared on a $10,000 bill which was used in the United States from the late 1920s until December 1945. The phrase In God We Trust which appears on US coins and paper currency was Chase’s idea. The phrase comes from the poem The Star-Spangled Banner by Francis Scott Key.

The Chase National Bank, which became the Chase Manhattan Bank was named after him.