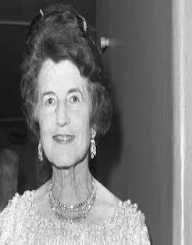 Rose Elizabeth Fitzgerald Kennedy was the matriarch of the prominent American political and business family, the “Kennedy family.” Born on July 22, 1890, she is the mother of politicians, President John F. Kennedy, as well as Senators Ted Kennedy and Robert F. Kennedy.

Rose Kennedy was a socialite and philanthropist, in addition to her active role in the Irish Catholic community. In 1951, Pope Pius XII bestowed her a Papal countess, making her the six American to achieve that feat. She was the husband of a prominent businessman and politician, Joseph Patrick “Joe” Kennedy.

Rose Kennedy was born on July 22, 1980, in Boston, Massachusetts. She was the first child of six by Mary Josephine "Josie" Hannon and John Francis “Honey Fitz” Fitzgerald. Her father was a politician who served as a Senator and later mayor of Boston.

She grew up in the Ashmont Hill of Dorchester, Massachusetts. Rose received education at the local Girls’ Latin School and continued at Kasteel Bloemendal, in Vaals, the Netherlands. Her high school education was at Dorchester High School, graduating in 1906.

Rose Kennedy then studied piano at the New England Conservatory, Boston. On the behest of her father, she enrolled at the Manhattanville College of the Sacred Heart, despite wanting to attend Wellesley College. During a Europe tour in 1908, Rose and her father visited the Vatican to meet Pope St. Pius X.

Rose Kennedy married Joseph Patrick “Joe” Kennedy on October 7, 1914. The couple had courted about seven years before their wedding. Rose's father strongly disapproved the relationship from the onset, yet Rose continued seeing Joseph. His disapproval was partly as a result of Joseph’s father, businessman and politician P. J. Kennedy being a political rival.

Rose Kennedy's family faced several tragedies including the killing of two sons by assassins in addition to the mental instability of her daughter. The first misfortune was the birth of Rose third daughter, Rosemary, who was born mentally challenged. To improve the condition, she underwent a lobotomy in 1941, which further worsened the situation. Romary’s mental instability resulted in her confinement in a mental institution.

The second tragedy was her first son Joe Kennedy Jr, a pilot, died in a plane explosion during a secret mission. The next was the shooting to death of his second son, President John Kennedy on November 22, 1963. Her eighth son Senator Robert F. Kennedy died in the same way as J. F. Kennedy. A Palestinian assassin shot and killed him on  June 5, 1968.

Rose Kennedy regarded herself as a full-time mother who devoted her entire life to raising her children. Also, she took an active interest in charities and activism. Rose was also a fundraiser and campaigner for charities.

She had an unquestionable devotion to the Catholicism similarly to the commitment to her children. Her autobiography, Times to Remember, was published in 1974. In 1984, she suffered a stroke, which had a toll on her health and used a wheelchair. Rose died on January 22, 1995, aged 104, from complications of pneumonia, survived by five children and several grandchildren. She was buried at Hollywood Cemetery, Brookline, Massachusetts.

For her charity works and being a devoted mother, Pope Pius XII, conferred her the title countess in 1951. In 1992, the intersection of Harley Street and Welles Avenue became "Rose Fitzgerald Kennedy Square," in her honor.

The documentary, Rose Kennedy: A Life to Remember is about Rose’s life. Annette O’Toole played her in the miniseries, The Kennedy’s of Massachusetts, 1990, while Geraldine Fitzgerald played her in Kennedy in 1983 among several others.