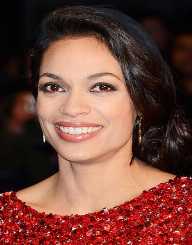 Rosario Isabel Dawson is an American actress and political activist born on May 9, 1979. After making her acting debut in the teen drama Kids in 1995, she has played numerous roles in a variety of independent and feature films including Rent, Grindhouse and Sin City. She has a long list of movies including He Got Game, 1998, Men in Black II, 2002, The Rundown, 2003, Percy Jackson & the Olympians: The Lightning Thief, 2010 and Cesar Chavez in 2013 among several others. In 2014, she won the Satellite Award for Best Supporting Actress in Motion Picture and had gained several other nominations.

Rosario Dawson is politically active and has taken part in several demonstrations and has been arrested twice in such protest. She is a staunch Democrat who supported Barrack Obama in his 2012 re-election and Bernie Sanders in the 2016 Democrat presidential slot.

Rosario Dawson was born on May 9, 1979, in New York City to writer and singer Isabel Celeste and Patrick C. Harris. Isabel gave birth to Dawson when she was just 16 years but never got married to Harris. Isabel instead married a construction worker Greg Dawson when Rosario was a year old but divorced in 2001. Her stepfather treated her well and took her as her daughter. When Dawson was six, the family became squatters and lived in an uncompleted building. She attended Garland High School after a year of staying in Garland.

Photographers Larry Clark and Harmony Korine discovered Rosario Dawson at age 15. Korine at the time saw Dawson who was standing on her front porch as perfect cast for a screenplay he was writing. That film became the controversial Kids in 1995 and was Dawson’s debut film. She played the role of Ruby in Kids which was about teens who indulged in sex and drugs. Though the film was met with several criticisms, Dawson’s character was praised, and that shot her to the limelight. After that successful role, she played roles in several independent and big budget blockbuster movies.

Some of her films include Rent, Men in Black II, and He Got Game. Dawson has featured in musical works like the remixed of 1999 by Prince and the music video Chemical Brother’s Out of Control all in 1999. She did the intro for OutKast’s track “She Lives In My Lap.” She starred in Josie and the Pussycat in 2001, Naturelle Rivera in 2002, 25th Hour in 2002 and Alexander in 2004 where she played the wife of Alexander the Great.

Rosario Dawson made a stage debut playing Julia in Shakespeare in the Park and Two Gentlemen of Verona at the Public Theater. She co-wrote the comic book Occult Crime Taskforce in 2006 and a year on starred in Death Proof. She also featured in the television series Daredevil in which she played Claire Temple in 2015 and would later reprise the role of Jessica Jones and Luke Cage.

Rosario Dawson just like other celebrities has had several rumours about her relationships. She is said to have dated Fringe Joshua Jackson and Jason Lewis. She has also dated the likes of Jay-Z and Boyle and currently in a romantic relationship with comedian Eric Andre.

Dawson has been actively involved in politics and has engaged in political activism. In 2004, she was arrested with others in a protest against President George W. Bush. She was again arrested on April 15, 2016, during the Democracy Spring protest in Washington D.C. She is a strong Democrat and supported Barrack Obama in the 2012 elections. She also backed Bernie Sanders during the 2016 Democratic Party primaries.

Rosario Dawson has been involved in several charity works. She helped raise funds for the Lower East Side Girls Club and among others like the One Campaign, Operation USA, environmental group Global Cool and Amnesty International. She has also supported the Parents, Families, and Friends of Lesbians and Gays and Voto Latino.

She has also served as a spokesperson for a group like of TripAdvisor.com philanthropy program, Doctor Without Borders, Conservation International and Save the Children among others. She was involved in the Respect! Campaign which targeted at preventing domestic violence in 2008. She did the voicing for the campaigns of Giverespect.org, a website that also advocated against domestic violence.