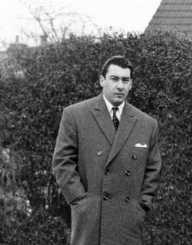 Ronnie Kray was famous for being the other half of the notorious Kray twins who were prominent figures in the crime scene during the 1950s and 1960s.

He died at the age of 61 on March 17, 1995, after suffering a heart attack at Wexham Park Hospital which is located in Slough, Berkshire.

Ronald “Ronnie” Kray was born on October 24, 1933, as the younger twin of Reginald “Reggie” Kray in East London, England. They were the children of Charles Kray Sr. and Violet Kray. The twins had an older brother by six years named Charles who assisted them in their ventures towards a life of crime in their adult years.

They spent their early education at Brick Lane in Wood Close School then later transferred to Daniel Street School. The Krays relocated to Bethnal Green shortly before World War II broke out. Soon after, their father went into hiding to avoid military enlistment, and the twins along with their older brother grew up under the care of their mother.

Ronnie Kray and Reggie adapted their maternal grandfather, Jimmy “Cannonball” Lee’s passion for boxing which they took up and blossomed into a professional career at the age of 19. By this time, it was already established that Ronnie had the more explosive temper as compared to his older twin but established the twins’ reputation for violence.

The twins were called to enlist in 1952 at the Royal Fusiliers. However, both of them were discharged dishonorably for their unruly behavior and landed them criminal records. As a result, this ended what may have been a profitable career in boxing.

With their boxing career already behind them, Ronnie Kray and Reggie opted to pursue a life immersed in crime instead. They started with protection rackets where their office was situated in a run-down snooker club that served under the guise of a nightclub. They established their gang called “The Firm” which took care of their business. Their crimes later upgraded to armed robbery, arson, and hijacking by the end of the 1950s and Ronnie was then imprisoned under the charges of running protection rackets and threats for 18 months in 1960.

During his imprisonment, Reggie Kray was granted a nightclub by Peter Rachman who was the mastermind of a violent landlord operation. The nightclub was called Esmeralda’s Barn where the Berkeley Hotel now stands. This further raised the twins’ already prominent personalities to celebrity status. They were well-acquainted with prominent media personalities at the time such as Judy Garland, Diana Dors, and George Raft to name a few and were even photographed by famous Swinging London Scene photographer David Bailey on several occasions.

The Krays Arrest and Trial

Ronnie Kray's temperamental nature eventually led to his downfall and drove both of them to a life behind bars. He shot George Cornell in full view of the public in 1966 at the Blind Beggar’s pub, but the twins’ influence and history of violence at the East End left people terrified to testify against them. However, his brother Reggie also murdered Jack “The Hat” McVitie in a public view which led people to spill on the twins that eventually led to their arrest in 1968. The evidence used against them was put together by Inspector Leonard Read of Scotland Yard who has been monitoring the twins since 1964.

Ronnie Kray published his autobiography entitled My Story in 1994. At the time of his imprisonment, Ronnie married twice. His first marriage was in 1985 to Elaine Mildener and divorced four years later in 1989. He married a second time to Kate Howard which ultimately led to a divorce in 1994.

Ronnie also openly admitted that he was bisexual in response to a comment made by Robin McGibbon to his book. He was rumored to have had a sexual relationship with a politician named Robert Lord Boothby back in the 1960s which were exposed on a tabloid.