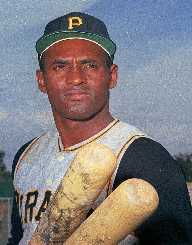 Roberto Clemente was a Puerto Rican baseball player. He became the first Latin American to score 3000 career hits and is considered an icon and role model among young baseball players in Latin America. A legendary baseball figure, Clemente played for the Pittsburgh Pirates. He was also a well-known social worker and humanitarian.

Roberto Clemente was born on August 18, 1934. His birthplace is Carolina, Puerto Rico and his star sign was Leo. He was born into a family with average income and had six siblings – 4 brothers and two sisters. His father worked in the sugarcane industry, and young Clemente helped him to raise the family income.

Roberto Clemente displayed remarkable talent in baseball early in his life. He went to the Vizcarrondo High School where he was recruited to play Softball after he impressed Roberto Marin with his baseball skills.

At 16 years of age, Roberto Clemente played for his municipality in the amateur league.

When Roberto Clemente was 18, he earned a contract from Cangrejeros de Santurce, a winter league team. Two years later, he signed up with the Brooklyn Dodgers and became part of their minor league team. He took some time adjusting to the climate and had a slow start. He hit his first home run on July 25, 1954. The next year, he was picked up by the Pittsburgh Pirates. He had an impressive start for them but then was put on the bench for the next two months.

The next year was a significant boost to Roberto Clemente's career who scored a remarkable .311. Soon, he became an integral member of the Pittsburgh Pirates. His career highlight came in 1960. He averaged .314 and hit 16 home runs, taking the Pirates to the World Series title. 1961 was another great year when he scored at a .351 average with 23 home runs.

Roberto Clemente was also awarded a Golden Glove that year for the first time. He then went on to win the award 12 times in a row. In 1971, Clemente was on a roll with .414 average. The next year, he reached 3000 career hits, a feat that he was unsure of. Sadly, his career ended shortly after due to his death in a plane crash.

Roberto Clemente was married to Vera Zabala. They tied the knot on November 14, 1964. The couple produced three sons together.
Clemente was known to be a proud Puerto Rican gentleman who was involved in a lot of charity work. He would often tell his wife that he would die young.

Roberto Clemente's suspicions came true in 1972. A massive earthquake hit Nicaragua on December 23, 1972. Living up to his reputation of being a great humanitarian, Clemente went there to provide support and do relief work. Nine days later, he boarded a cargo plane to carry relief items to the affected area. The plane was overloaded, however, and crashed into the Atlantic Ocean. He died in the crash, and his body was never recovered. Only a case was found that contained some of his personal belongings.  Clemente was inducted into the Baseball Hall of Fame, the next year.