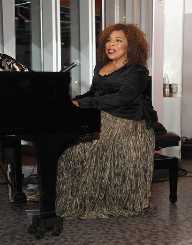 Roberta Flack is an R&B singer and a songwriter.

Roberta Cleopatra Flack on born February 10, 1937 (some say 1939) in Black Mountain, North Carolina to parents Laron LeRoy and Irene Flack. She was raised in Arlington, Virginia, where her father was a tobacco picker and her mother a church pianist. Roberta’s first piano was salvaged from the local dump. Roberta has one brother and two sisters.

When she was fifteen, she graduated from school and was accepted into Howard University with the full scholarship. She was a piano major but later changed to Music Education. Then, she organized choral groups and worked at Freeman’s Hospital directing a choral of nursing students. Roberta was the first student in Howard to give a public recital in vocal music.

Before graduating from Howard University, Roberta Flack became the first black woman to have a position as a student teacher in an all-white Alice Deal Junior High School in Washington D. C. Roberta graduated top of her class with Bachelor of Arts in Music at the age of nineteen. She took up teaching to support the family after her father passed away. She sang and trained her way in Washington. She took voice lessons from Frederick “Wilkie” Wilkinson, who told her to try pop music, rather than classical.

Roberta Flack played forty-two songs in three hours for producer Joel Dorn. Her first record First Take was recorded in 10 hours. Her career was not famous until Clint Eastwood chose a song for his movie Play Misty for Me, “The First Time I Saw Your Face” became the biggest hit in 1972, launching her career.

Roberta had seventeen albums in her career, Let it Be Roberta was released in 2012, featuring Beatles songs. She still holds concerts around the world.

Roberta founded Roberta Flack School of Music at the Hyde Leadership Charter School - a music education program to underprivileged students free of charge. She is also the member of the Artist Empowerment Coalition, which tries to protect the rights of artists to control their creative properties.

Roberta Flack was married to Steve Novosel from 1965 to 1972, he was a jazz bassist, and the marriage was opposed by both families. She is the mother of rhythm and blues musician Bernard Wright. Also, it was not confirmed if she adopted or gave birth to him.

Roberta Flack won the Record of the Year for “The First Time Ever I Saw Your Face" in 1973 and Record of the Year and Best Pop Vocal Performance for "Killing Me Softly with His Song" in 1974. In 1999, she had a star on Hollywood Walk of Fame.