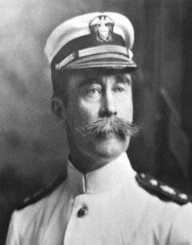 Robert Peary first job was as a county surveyor.  Robert Peary also served as a draftsman for the U.S. Coast and Geodetic Survey in Washington, DC.  In 1881, Robert Peary joined the U.S. Navy Civil Engineer's Corp.

As a civil engineer, Robert Peary was ranked as lieutenant.  It helped him start his career toward exploration.

His first assignment as a civil engineer took him to Nicaragua in 1884 to survey a ship canal.  Robert Peary had an interest to learn more about the North Pole.  During an inspection trip to Greenland in 1886, Robert Peary and three others tried to investigate as much as they could.

However, a food shortage and the necessity to return to duty in Nicaragua cut their adventure short.  Robert Peary wrote a paper about crossing the ice cap in Greenland for the National Academy of Sciences that same year.

In 1891, Robert Peary attempted to see if Greenland was connected to the North Pole.  Robert Peary went with his assistant Mathew Henson, Peary's wife, and six others.  He received funding for the expedition by three organizations:

The Brooklyn Institute of Arts and Sciences, The American Geographic Society, and the Philadelphia Academy of Natural Sciences.  The results of that expedition was that Greenland was an island.

From 1888 to 1891, Robert Peary was assigned as a naval engineer along the Eastern seaboard.  During this time, Robert Peary planned his first expedition to the North Pole.  Robert Peary thought he was prepared researching the natives who lived in the region. His first attempt in 1898 was not successful because of weather conditions.  One result was that Peary had to have all of his toes amputated because they were frozen.

Robert Peary's second attempt was funded by his lectures.  The expedition went from 1898 to 1902.  The team discovered Cape Jesup at the most northern tip of Greenland. On his third attempt, Robert Peary reached the North Pole on April 6, 1909.  Robert Peary and his team of five people finally achieved the goal.  Robert Peary went on to publish his memoirs and experiences from all of his expeditions.

Robert Peary married Josephine Diebitsch in 1888.  The couple had two children, but the son died.  Because of his work, Robert Peary only spent about a total of three years of the first twenty-three years of marriage together.

Robert Peary also had a relationship with an Inuit woman named Aleqasina led to the birth of their daughter in 1893.

There is still some dispute whether Robert Peary and his team were the first to discover the geographical North Pole.  His former colleague Frederick Cook claimed to reach the North Pole a year before Peary.

Both have fought to discredit the other.  A commission at the University of Copenhagen declared that Cook did not reach the pole, thus giving Peary full credit.  The conflict made future explorers to document and record their expeditions thoroughly so that there would be no doubt of their own discoveries.  This was true for Roald Amundsen who discovered the South Pole.