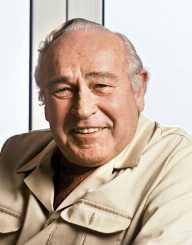 Actor, producer and thriller writer Robert Ludlum was born in New York on the 25 May 1927 and adopted by Margaret Wadsworth and George Ludlum. He was raised in Short Hills, New Jersey and in his teens left home to become an actor. He then enlisted in the US Marine Corps and post-World War II, served in the Pacific.

Robert Ludlum was a pupil at The Cheshire Academy before doing a BA degree in drama at Wesleyan University, Connecticut (1951).

Robert Ludlum acted in the theatre and appeared on Broadway and television. He also worked as a producer and in 1960, produced The Owl And The Pussycat which starred Alan Alda. Because of his distinctive voice, Ludlum also found work as a voice actor for commercials.
He was the manager of the Playhouse on the Mall in Paramus, New Jersey and also continued producing plays.

Robert Ludlum's first novel The Scarlatti Inheritance was a bestseller, and he continued writing books in the same genre such as The Osterman Weekend (1972), The Bourne Identity (1980), and others. Miniseries of his novels include The Rhinemann Exchange (1977), The Bourne Identity (1988), with Richard Chamberlain portraying Jason Bourne;  and The Apocalypse Watch (1997). Films are The Osterman Weekend (1983), The Holcroft Covenant (1985),

Robert Ludlum and his wife, actress Mary Ryducha, married in 1951. They had two sons and a daughter. After the death of his first wife in 1996, he remarried Karen Dunn in 1997. Robert Ludlum died on the 12 March 2001 at the age of 73. Shortly before his death, he had been injured in a fire at his home.

Robert Ludlum died a month later from a heart attack. In 2001, Forbes magazine listed Ludlum as the 13th wealthiest deceased celebrity in the US. At that date, he had sold 210 million books worldwide. His nephew, Kenneth Kearns, co-authored a book about his uncle entitled The Ludlum Identity. His widow, Karen Dunn, committed suicide in 2008.

Robert Ludlum was a victim of a suspicious fire in his home in Naples, Florida in February 2001 when he sustained severe burns.

Robert Ludlum's estate is administered by a trust which is run by Jeffrey Weiner, his former accountant who is also the CEO of Ludlum Entertainment. Since the author’s death, his books have continued to generate sales as well as spin-offs into film, games and new books with gross revenues over US$1 billion.