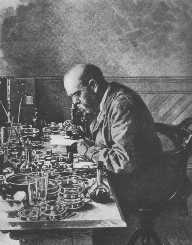 Robert Koch was a German physician he is best known for identifying the causes of tuberculosis and cholera.

Koch was born on 11 December 1843 in Clausthal, Germany. His parents were Hermann Koch and Mathilde Julie Henriette Biew. His father worked as an engineer, and his mother kept house. Koch taught himself to read as a child through reading newspapers. Koch attended the University of Gottingen. At first, he studied natural science but later switched to medicine. Koch wanted to become a physician, and he graduated with top class honors in 1866.

Koch was involved in a study of uterine nerve structure with anatomist Jacob Henle while still a student, Koch’s research focused on succinic acid. During the Franco-Prussian War Koch served as a surgeon for the German forces. Following the war, he moved to Wollstein in Eastern Prussia (modern-day Poland) and worked as a physician. In 1885, Koch became a professor at Berlin University. Koch is best known for his research into microbiology. He was the first to identify the bacteria in anthrax which in certain conditions made it fatal. Koch observed the bacteria and named it Bacillus anthracis. His work supported the growing ‘Germ Theory’ of the disease. From his research on anthrax Koch developed four postulates for dealing with microorganisms in diseases. The postulates dealt with pure cultures and identifying the exact cause of the disease. The four postulates are,“The organism must always be present, in every case of the disease, The organism must be isolated from a host containing the disease and grown in pure culture, Samples of the organism taken from pure culture must cause the same disease when inoculated into a healthy, susceptible animal in the laboratory” and “The organism must be isolated from the inoculated animal and must be identified as the same original organism first isolated from the originally diseased host”.

Koch used agar, jelly like substance produced from algae, as a medium to cultivate bacteria as it was transparent and kept a constant 37 degree Celsius temperature. Koch traveled to Egypt and India to study cholera to identify and isolate the cause of the disease. Koch was able to isolate the causative agent, Vibrio cholera. Koch was employed as a government advisor with the German Health Department and turned his attention to tuberculosis. Before Koch’s work, it was popularly assumed that tuberculosis was hereditary. Koch was able to isolate and identify the bacterium that was responsible and prove that it was not hereditary.

Koch received the 1905 Nobel Prize for in Medicine. Koch was made a foreign member of the British Royal Society. A marble statue dedicated to Koch stands in Berlin today.

Koch married for the first time in 1867. Koch and his first wife, Emma Fraatz, had a daughter, Gertrude, together. Koch and Fraatz divorced in 1893. He married Hedwig Freiburg, an actress, the same year. Koch died in the German city of Baden-Baden on 27 May 1910.