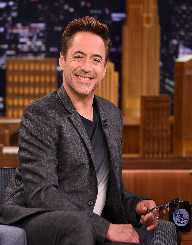 Robert John Downey Jr. was born on 4th April 1965, to Robert Downey Sr., and Elsie Downey. He was born in Manhattan, New York, United States, and had an older sister, Allyson. Downey’s father was an actor, director, and producer, and his mother was an actress, who quite often acted in his father’s movies.

Robert Downey Jr. grew up around not only the acting and entertainment industry but also drugs, as his father was a drug addict. Downey Sr. introduced Downey to marijuana when he was just six years old. As well as doing drugs with his father, Downey also started acting in his movies, starting at the age of five.

Robert Downey Jr. moved to England, and at the age of ten was studying classical ballet, after which he moved back to the US and as a teenager, studied at the Stagedoor Manor Performing Arts Training Centre in New York. His parents divorced in 1978, and Downey moved to California with his father. He was attending Santa Monica High School, but in 1982, he dropped out and returned to New York where he had decided on a full-time acting career.

In 1983, Robert Downey Jr. began with roles in theater productions, and in 1985, went on to win himself a part in the cast for Saturday Night Live. That same year, his movie acting breakthrough came when he was cast in Tuff Turf, beside James Spader.

Over the ensuing years, Robert Downey Jr. starred in many movies, including Weird Science (1985), The Pick-up Artist (1987) and Less Than Zero (1987). He acted in movies with names such as Ryan O’Neal, Cybill Shepherd, Mel Gibson, and Sally Field, becoming a household name.

Although his career was in full swing, between 1996 and 2001, Robert Downey Jr. was arrested several times on drug-related charges. He completed several drug treatment programs, none of which were successful. In 1997 when he missed one of his drug tests that had been ordered by the court, he was sent to prison for six months. In 1999 he missed yet another drug test, but this time he was imprisoned for three years. It was probably good timing for Downey if there could be such a thing given the circumstances, as most of his filming commitments had wound up. He only had one movie that wasn’t finished, and he was allowed to complete it before going to prison.

Robert Downey Jr. was released after 12 months, and quickly found himself an acting role in Ally McBeal. He filmed 25 episodes of the hit television series, reviving the ratings of the show which had been on the downturn.

In 2000 and 2001 Robert Downey Jr. again had brushes with the law due to drug-related issues. He started losing work because of his condition. He was written out of Ally McBeal, lost his stage role in Mel Gibson’s production, Hamlet, and also lost work in a film Woody Allen wanted to cast him for.

In 2001, Robert Downey Jr. was at a very low point. He decided to reach out for help with his drug problem and didn’t look back once he received it. When he came out of rehab, he started acting again. He was close friends with Mel Gibson, and Gibson paid the insurance bond for Downey to act in The Singing Detective (2003).

Robert Downey Jr. was a success in the movie and continued with a steady stream of acting roles after that. Although Robert Downey Jr. had had many acting roles, he had never starred in what was considered a “blockbuster” movie. In 2008, he starred in Iron Man, which was critically acclaimed. Due to the global success of the movie, they decided to do two sequels for Iron Man, and Downey had also been signed up to make appearances in several other movies by Marvel Studios, in The Avengers series. After the Iron Man movie, Downey was given the role of Sherlock Holmes, in Guy Ritchie’s movie, released by Warner Bros in December 2009. The movie was a huge success and became the 8th highest grossing movie of 2009.

Robert Downey Jr. has appeared in around 80 movies, which attests to his work standards, despite earlier years not being quite on track while fighting his demons. The strength of the individual won the day with Downey asking for help and taking advantage of it when offered. His career is in full swing, with no signs of retirement.

Robert Downey Jr. won both a Golden Globe Award and Screen Guild Award for his role in Ally McBeal (2001).

Robert Downey Jr.y married Deborah Falconer in 1992, but the marriage broke down, and they divorced in 2004, due to Downey’s battle with drugs. Downey and Falconer had a son, Indio.

He married Susan Levin in 2005. The couple met in 2003 on the set of one of his movies. Levin was Executive Vice President of Production for the film company. Downey and Levin have two children, a son, and a daughter.

Robert Downey Jr. says he has been drug-free since mid-2003. He credits his wife, his family, meditation, yoga, Wing Chun kung fu, and therapy for being able to maintain his sobriety. It is a credit to Downey that he has been able to get his life back on track.