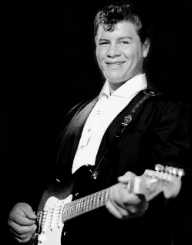 Ritchie Valens was an American musician who is best known for being part of the trio of musicians that were involved in ‘The Day that Music Died’ plane crash with Buddy Holly and the Big Bopper.

Ritchie Valens was born in Los Angeles, California on 13 May 1941. Valens was born as Richard Steven Valenzuela into a family of Mexican descent. His parents were Joseph Valenzuela and Concepcion Reyes. Valens had four siblings, Robert, Connie, Irma, and Mario. Valens Mexican ancestry had a big influence on his musical style as he grew up listening to mariachi music. Valens would later pioneer a kind of Mexican-American rock known as Chicano rock. Valens began playing music at the age of five and learned guitar, trumpet, and drums. Although he was left-handed Valens learned to play a right-handed guitar. Valens was entirely self-taught as a musician.

Ritchie Valens began playing with a band at his school-aged sixteen. He originally was a guitarist for the group named, the Silhouettes, but eventually became their lead singer. Valens earned the nickname the Little Richard of San Fernando. In 1958, Valens was signed by Bob Keane to the record label Del-Fi Records. It was at this time Valens chose the recording name, Ritchie Valens, as it was deemed more marketable. Valens first worked on demos with Keane before he began recording at Gold Star Studios with a full band. Only two records were released while Valens was still alive. The first record was Come On, Let’s Go which had Framed as its B-side. The second was Donna and La Bamba which were a double A-side release. The Donna record sold over a million copies. Following his success, Valens dropped out of high school to devote himself full time to the music.

Valens began touring the country and making TV appearances. Valens appeared with the likes of Chuck Berry, Paul Anka, and the Everly Brothers during this time. Valens also appeared in the film Go Johnny Go. Valens had developed a fear of flying as a child when a mid-air collision between two planes occurred above his school. Valens was forced to overcome this fear for the sake of his career. In 1959, Valens was on tour with Buddy Holly, the Big Bopper, and Frankie Sardo. The covered the American Midwest and the group mostly traveled via tour bus. However, as the weather worsened the conditions on the bus deteriorated, and a number of the band members became sick.

In the early hours of 3 February, 1959 Valens won a seat on a chartered plane in a coin toss to travel from Clear Lake, Iowa to the next leg of the tour in Fargo, North Dakota. On board were Big Bopper and Buddy Holly. Shortly after take-off, the plane crashed killing all three passengers and the pilot, Roger Peterson, instantly. The event became known as the ‘Day that Music Died’ and is immortalized in the Don McLean hit American Pie. Valens was 17 at the time of his death and had been recording for just eight months.