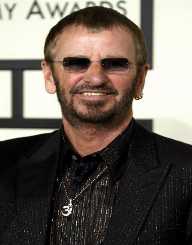 Richard Starkey AKA Ringo Starr was born on July 7th, 1940. He was born in Liverpool, U.K. He is a renowned English musician, singer and a songwriter. His career breakthrough came in at the time when he was a member of the famous band, the Beatles. This was during the 1960s era. He was involved with the band as a professional drummer. Nonetheless, he also wrote and sang songs for the group. He wrote "Octopus's Garden," and he sang "With a Little Help from My Friends."

Ringo Starr was born on July 7th, 1940. He was the only son of Richard Starkey and Elsie Starkey. When Starr was four years of age, his family shifted to a new location. After this, it did not take time before his parents parted ways. His father left them, and he was under the care of his mother. As a result of this, Elsie had to go through odd jobs to support the young kid. He first worked as a cleaning woman before later working as a barmaid.

When Starr was six years old, he suffered from appendicitis. This made him fall into a coma for three days. He did not fully recover and therefore had to live in a nearby children’s hospital. He took a whole year to recover. In 1948, Starr was discharged from the hospital. However, his mother was keen not to take him to school immediately. Consequently, he went to school after he was eight years old. This had a negative impact on his academic performance.

Disaster knocked Starr’s door once again in 1953. This was after contracting tuberculosis. He had to be in an infirmary for almost two years. The hospital had a way of encouraging patients to join their band. This was a move that would aid in facilitating quick recovery. Starr’s interest in drumming began from this point.

During the same year, his mother, Elsie got married again to Harry Graves. Her new husband encouraged Starr to pursue his music career. He even introduced Starkey to several soundtracks done by Billy Daniels, Dinah Shore, and Sarah Vaughan. Soon, Starr was discharged from the hospital. This time he was far much behind in the school curriculum and found no reason for going to school anymore. Thus, Ringo Starr chose to stay home and spend more time listening to music.

With time, Ringo began playing skiffle music. This was after trying several odd jobs that were not paying well. In 1957, Starr got his first drum kit. Years later, the managed to join a real band that had real instruments to play with. During this time, he chose the stage name, Ringo Starr. This name developed out of the rings that he wore on his fingers. The name of the band that he initially played with was Rory Storm and the Hurricanes.

Immediately after quitting from Rory Storm and the Hurricanes, Ringo Starr joined the Beatles. He was to act as a replacement for Pete Best. Their first performance with Ringo Starr was at the Cavern Club located in Liverpool. Fans were initially not happy with the switch that the Beatles had made. With time, he gained popularity and became loved by the Beatles fans.

George Martin, an individual who had signed the Beatles into EMI and was helping them in producing their singles, was uncertain of Starr’s capabilities. As such, he sidelined him on some occasions by finding another drummer. Sooner or later, Starr proved himself both to the Beatles fans as well as to George Martin. After some time, Starr grew into the Beatles and played uniformly with their tunes.

Their next single "Please Please Me" was sensational hitting the headlines in entire England. Moments later, their debut album, Please Please Me in 1963 was released. This boosted their popularity out there hence bringing the Beatlemania wave during the 60s.

At some point, the Beatles had creative tensions pulling them apart. This occurred during the early 70s with each trying things on their own. In April 1970, the group separated after having won the hearts of millions globally. Together, they had released over 45 songs that were hit top 40 in the U.S alone.

During the same year after the band separated, Ringo Starr released his first solo album Sentimental Journey. Inspired by country music, he went on to release Beaucoup of Blues a year later in 1971.

An interesting fact about Starr is that, regardless of splitting with his former band Beatles, he still worked with each one of them. For example, he drummed for John Lennon and George Harrison. While working with Harrison, he was the co-writer for his hit single named "It Don't Come Easy.” During this period of teaming together, Harrison went on to release two hit songs that topped the charts in the U.S.

After establishing his record label in 1975 called Ring O'Records, he engaged in the excessive consumption of alcohol and other drugs. Partly, this affected his career as there was nothing more he could do other than indulging in drugs. Ringo Starr went to the extent of being a member of a drinking club dubbed The Drinking Vampires.

In 1965, Ringo Starr got married to his first wife called Maureen Tigrett. The couple had three children, Zak, Lee, and Jason. After spending ten years together, they divorced. Later on, in 1981, he got married for the second time to Barbara Bach.