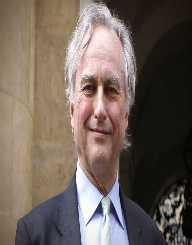 Born on March 26, 1941, Clinton Richard Dawkins is an evolutional biologist, author, and ethnologist. He is a strong critic of creationism, intelligent design and against alternative medicine. A person who believes it high time atheist stood against the church influence in governance and science. He rose in popularity when he published the book The Selfish Gene in 1976. The book which was gene evolution centred and came out with the term meme. His other popular books include The Extended Phenotype, 1982 and The Blind Watchmaker 1986.

In the Blind Watchmaker, Richard Dawkins argues against the existence of any supernatural creator and believes evolution theories gives a better explanation for the complexity of life than religion. His argument was extended in the book The God Delusion, 2006 which insist that there is no such thing as supernatural creator and calls religious faith a delusion. An award-winning writer is also an emeritus fellow of New College, Oxford, and founder of the Richard Dawkins Foundation for Reason and Science, 2006.

Richard Dawkins was born to Jean Mary Vyvyan and Clinton John Dawkins in Nairobi, Kenya. He had a younger sister. With his parent interest in natural sciences and father was an agricultural, civil servant, Dawkins grew up around animals, and that made him study animal life and behaviour. At age eight he moved with his family to England in 1949. Growing up, Dawkins upheld the Christian faith until he found better answers to the complexity of life with the evolution theories than religion ever gave him. Since then he never believes in anything called god.

Dawkins had his early education at the public school, Oundle School, Northamptonshire from 1954 to 1959. He graduated from the Balliol College, Oxford, in 1962 where he studied zoology under the tutelage of renowned ethologist, Nikolaas Tinbergen. He later received an MA and DPhil degrees in 1966 after his research studies under the supervision of Tinbergen. Dawkins had previously read Why I Am not a Christian while at Oundle School which had some influence on his previous belief in the existence of a supernatural creator.

After his MA and DPhil, Richard Dawkins remained as a research assistant at the Balliol College for a year. There, Dawkins researched into decisions making of an animal. His supervisor, Tinbergen had previously investigated into the study of animal behaviour with a focus on instinct, learning, and choice.

Richard Dawkins started his career as a professor of zoology at the University of California, Berkeley from 1967 to 1969. While there, he joined an anti-war protest of the students against the Vietnam War. He returned later in 1970  to the University of Oxford as a lecturer. Two decades on, he became a reader of zoology would in 1995 be appointed by the University as a Simonyi Professor for the Public Understanding of Science and held the position to 2008.

The position endowed by Charles Simonyi intends that the holder "be expected to make important contributions to the public understanding of some scientific field.” He also made it clear that the first person to assume that position be Stephen Dawkins. Dawkins he also since 1970 been a fellow and later an emeritus fellow at the New College, Oxford. He had given several lectures including the maiden Erasmus Darwin Memorial Lecture, 1990, the Irvine Memorial Lecture, 1997, the Sheldon Doyle Lecture 1999, and the Tinbergen Lecture 2004.

Richard Dawkins did a lot of works in evolutionary biology, especially emphasising on genes as an essential component in a unit of selection in evolution. He explicitly explains this factor in his books like The Selfish Gene and The Extended Phenotype. In The Selfish Gene, he argues that gene cannot be an independent unit because it cannot survive alone, but need to corporate with other genes to build an individual. It is in this book that he came up with the term meme.

The Extended Phenotype pinpoints that all other genes are part of the environment they adapt from an individual genes perspective.

Richard Dawkins has been a strong critic of religion and saw it as a delusion. Though he was once a Christian and baptised into the Church of England, he became skeptical about religion after learning about Darwinism and getting a better understanding of the complexity of human and nature through science. Being an atheist, he believes in no God but instead holds the view that God could be among individuals sophisticated in science.

He also maintains that physicist just used God as a metaphor just because of the overwhelming and complex nature of the universe but not a supernatural being who oversees the activities of the world, forgives sin or reincarnates people when they die. His book The God Delusion gained him prominence on the debate about science and religion.

Richard Dawkins has funded many atheist organisations and individuals. Aside from religion, he is also against the concept of creationism. He does not understand why people believe that a “deity created the universe, humanity, and life.” He believes in evolution and states his mind clearly in his book The Blind Watchmaker. He is also of intelligent design in science education, pseudoscience, and alternative medicine.

Richard Dawkins came out with his foundation the Richard Dawkins Foundation for Reason and Science (RDFRS) in 2006 aimed at financing research works on the psychology of belief and religion. It is also to found scientific programs and materials, support charity organisations which are secular in belief. The foundation in 2016 merged with the Centre for Inquiry and Dawkins serves as a member of the board of directors.

Richard Dawkins is a three-time divorcee and has a daughter from the three marriages. His first marriage was to ethnologist Mariam Stamp on August 19, 1967, and divorced in 1984. He then married Eve Barham on June 1, 1984, and had a daughter Juliet Emma Dawkins but also divorced. His last marriage was to Lalla Ward in 1992 but also separated in 2016.