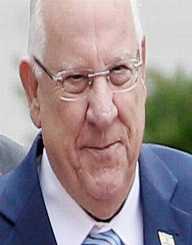 Reuven Rivlin was born on September 9, 1939. He is an Israeli politician. He is the tenth and current President of Israel. He had been President of Israel from 2014. He has served in various posts in the Israel government. He is known for advocating for a one-state solution.

Reuven Rivlin was born on September 9, 1939, in Mandatory Palestine. He was born to Yosef Yoel Rivlin and Rachel Rivlin. His father was a scholar of Semitic languages, and he created the Hebrew version of the Quran. He attended the Gymnasia Rehavia High School. In 1957, he joined the Israel Defence Forces as an Intelligence officer. He held the rank of major in the forces. He later joined the Hebrew University of Jerusalem where he studied law. He graduated from the University with an L.L.B. Degree and started working as a legal professional.

In 1988, Reuven Rivlin became the chairman of the Likud Party. In the same year, he was elected as a member of the Knesset in Israel. In 1996, he was re-elected as a member of the Knesset. He was also re-elected in 1999. In 2001, he was appointed the Minister of Communication in Prime Minister’s Ariel Sharon government. In 2003, he became the speaker of the Knesset, a post that he held up to 2006. In 2007, he was a presidential candidate for the Likud Party, but he pulled out from the elections later on.

In 2009, Reuven Rivlin was elected as the Speaker of the Knesset for the second time, a position he held up to 2013. He advocated for the rights of the minority in the society. He shuns racism, and he expressed disgust in 2013 when anti-Muslim and anti Arab slogans were made by fans of the Beitar team after the team inducted two Muslim players. In 2014, he was elected as the tenth President of Israel after defeating Meir Sheetrit. He withdrew himself from the Knesset after becoming the President. In 2015, he received death threats after he expressed disgust on a firebombing attack to a Palestinian home that was suspected to be conducted by Jewish Extremists.

Reuven Rivlin married Nechama Shulman with whom he has four children. He is currently seventy seven years old.