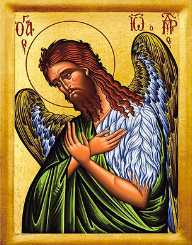 John was born late in the first century, BC, to Zechariah and Elizabeth. He was born in Herodian Judea, the Levant.

St. John the Baptist preached to many, baptizing them as they repented for their sins. He spoke of the Messiah that would come after him, meaning Jesus Christ.

He baptized Jesus in the river Jordan when Jesus came to him.

The Gospel of Mark describes John as living on locusts and honey and wearing clothes made from camel's hair.

Only the Gospel of Luke describes John being born. His parents were past child-bearing age, and it was miraculous that Elizabeth became pregnant. There is also mention that Elizabeth was related to Mary, the mother of Jesus.

Herod was King during the years of John's preaching. John admonished him for divorcing his wife and marrying Herodias, the ex-wife of his brother.

Herodias demanded the execution of St. John the Baptist, and Herod agreed after some hesitation. As a result, John died by beheading. He died somewhere between 28 AD and 36 AD.

The Gospels paint Matthew as a prophet, fulfilling a prophecy from the book of Isiah. He is also said to be Elijah, although John disputes this.

St. John the Baptist is a significant figure in church history, with several faiths worshipping him. These include Christianity, Islam, Mandaeism, and the Baha'i Faith.

He is one of the most revered figures in religious history and is the patron saint of many churches, cities, and countries.