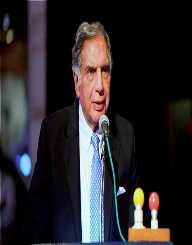 His journey to success started at Tata steel as a blue collar worker. Tata groups was run by J.R.D Tata at that time. He was made the chairman of the Tata group after J.R.D Tata retired. It was under his leadership the Tata organization began to rise to success. Tata groups started having international recognition and revenues spiked up. This made the Tata company a global brand name. Now retired, he still makes his impact felt by serving as a guide to his conglomerate through his pioneering ideas.

Ratan Tata was born on the 28th December 1937, by Naval and Sonoo Tata, in Surat, India. His father is the adopted son of Ratanji Tata, whose father, Jamsetji Tata, founded the Tata group of companies. He was raised by his grandmother, NavajbaiTata after his parents separated in the mid-1940’s.

He attended Campion school, Bishop Cotton School, and the Cathedral & John Connon in Mumbai. Ratan Tata then obtained a B.S degree in architecture and structural engineering from Cornell University, USA, in 1962. In 1975, he completed his Advanced Management Program at Harvard Business School.

His career in the Tata group began at Tata Steel in 1962. Ratan Tata worked operating the blast furnace and shoveling limestone. In 1971, He was made the director-in-charge of NELCO(National Radio & Electronics Company Limited) to help curb its financial struggle. He wasn’t successful due to the economic recession and strikes by the union.

Ratan Tata was moved to Empress Mills, within the Tata group, in 1977. To help the mill out of its struggle, he proposed a plan. The plan was rejected by the other Tata executives. The mill was eventually shut down, and he was transferred to the Tata industries.

Ratan Tata was made the chairman of the Tata group of companies by J.R.D Tata in 1991. This decision was criticized and objected to other executives of the company. His successful rule was highly doubted. He successfully improved the finances of the company and expanded the growth of the industries. His leadership brought a lot of profit to the company, a good international reputation, and global significance.

Ratan Tata resigned as the chairman of the Tata Group in 28th December 2012. That was also his 75th birthday. He was succeeded by Cyrus Mistry who was the managing director of the ShapoorjiPallonji Group. Ratan Tata was made the interim director after Cyrus Mistry was removed a few years later. Today, Tata groups are now led by Natarajan Chandrasekaran.

Ratan Tata resides in a simple house in Mumbai and drives a Tata sedan. He is a bachelor and practices Zoroastrianism.

Ratan Tata is known to be very generous. In 2010, $50 million was donated to construct an executive center in Harvard Business School. The center is named TataHall after Ratan Tata. It is seven stories tall and 150,000 gross square feet. This center contains about 180 bedrooms and academic and multi-purpose spaces.