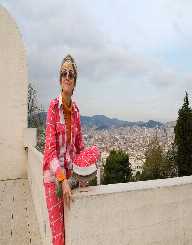 Pipilotto Rist was born in the year 1962. Her birthplace is Switzerland in Grabs, Sankt Gallen to be exact. Her real name was Elizabeth Charlotte Rist. The name Pipilotti came about during her childhood years where she inherited the nickname Pipilotti from the world-renowned book character, Pippi Longstocking. Pipilotto Rist was a student of commercial arts as well as illustration and photography. She attended a school where she studied the fields mentioned earlier during the four years to 1986. The name of the school was the ‘Hochschule für Angewandte Kunst’ and was actually in Vienna. Pipilotti continued her studies at The School of Design in Switzerland. Pipilotto Rist music talent showed between the years 1988 and 1994 as she took the role of a drum player in a girly rock band entitled The Next Queens.

Pipilotti continued her study part by joining up for video lessons at the same School of Design Rist's decision to partake in video lessons was spurred on by a teacher. It was not long before Pipilotti’s video; “I’m Not the Girl Who Misses Much” was recognized and acknowledged. The video was a single-themed showcase of the artist who was dressed in a little black dress against a pure white background. Rist's poses came with hints that highlighted the fact that she was celebrating her body. The video has the artist singing the lyrics, “I’m not the Girl Who Misses…” The lyrics of this song was partially used from John Lennon’s “Happiness is a Warm Gun” soundtrack. Rist's video was a ploy to promote a message revolving around the theme of sexism on MTV.

In the 1990s, Pipilotto Rist focused more on her visual art display rather than on the slant of her video skills. Rist showcased her work at many art exhibitions in some top locations such as the ‘Museum of Contemporary Art’ in Chicago and the ‘Stedelijk Museum’ in Amsterdam. Rist also showcased her work at the ‘National Gallery’ in Berlin. Rist's image that showcased the female body and the sexual arousal linked to the artwork came out in 1992. Her work was called the Pimple porno. This particular art piece brought sex and desires to the forefront using deep colors.  In 1997 Pipilotto Rist moved back to showcase her art through a video called ‘Ever is Over All.’ The video portrayed a woman at a tender age crashing windows using a hammer on the street. Rist's video had been bought by the New York Museum of Modern Art.

The career ofPipilotto Rist got on a fast lane, which saw her lecture at the University of California in Los Angeles for a year. By 2005, Rist was at the Venice Biennale to represent Switzerland. A year later Rist worked on a commission for the visual identity of the Armory Show. Pipilotto Rist put her art on display as part of a group exhibition in Reykjavik Art Museum and the 21st Century Museum of Contemporary Art. Rist's work also features at the New Museum of Contemporary Art in New York and the Contemporary Art Centre to name but a few. In respect of Rist's feature films, ‘Pepperminta’ was the first feature created by Rist. The 2009 film told the tale of ‘anarchist of the imagination.’ The movie came out for screening at the Venice Film Festival.

Pipilotto Rist work was a delicate blend of gender, sexual and bodily issues.Rist's video productions entailed color bursts that exploded on screen and told a tale in only minutes. Pipilotto Rist film career peaked in 1990 and as such was seen in museums, international biennales and on television. Rist used her ideas on sex and sexual experiences at the forefront of her work. Rist made her mark by closing the gap between culture and art through the incorporation of diverse media. Some art critics have termed her work as feminist, but her pure art has significant appeal to a worldwide audience.

During the year 1999, Pipilotto Rist bagged the ‘Wolfgang Hahn Prize’ for her different visual productions.
The year 2001 saw Ritz grab the ‘Art Prize’ from the City of Zurich. Rist managed to gain the Zürcher Kunstpreis and Stadt Zürich in 2001 as well as the award from a university in Berlin during the year 2004. Rist's video graphic presentation of “Pour Your Body Out (7354 Cubic Meters)" got awarded as the ‘Best Exhibition Of Digital, Video, or Film’ during the 26th yearly awards hosted by ‘The International Association of Art Critics (AICA).’ She even won a prize from Barcelona.

The year 2010 saw Rist talking an award in Miami called the ‘Cutting the Edge Award.’ Rist gained the International Artist of the year accolade in 2012. By 2014, she was on the stage once again to grab the Best Site Development award.

In 1998, Pipilotto Rist was a finalist in the race for the Hugo Boss Prize. This award was presented bi-yearly by the Guggenheim Foundation in an attempt to honor artists. Rist’s art has been presented at solo shows in the San Francisco Museum of Modern Art as well as in Museo de Arte Contemporáneo de Castilla y Léon which is in Spain.

Pipilotto Rist has a love interest in Balz Roth. The two have a son called  Himalaya.