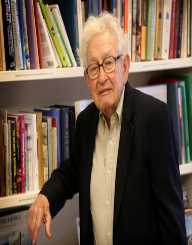 A Reflection on Physics and Symmetry: Philip Warren Anderson

American Physicist and Nobel Laureate Philip Warren Anderson is best known for his pioneering research on semiconductors, magnetism, and superconductivity. He is amongst the most important scientists of his generation.

Philip Warren Anderson was born on December 13, 1923, in the city of Indianapolis, USA. He was the son of Harry Anderson and his wife. Harry Anderson was a Professor of plant pathology at the University of Illinois in Urbana while his wife was a graduate with a bachelor’s degree. Anderson’s mother had the unique distinction of having a bachelor’s degree as it was a rare feat back in those days. He was raised in Urbana, Illinois along with his older sister.

Philip Warren Anderson completed his primary and secondary education from the renowned University Laboratory High School located in Urbana. He graduated from the school in the year 1940. Mathematics was one of the favorite subjects of Anderson during his school days. His affinity towards math was so much that he had intended to take it up as his subject of major after graduation. In 1937, he spent a substantial amount of time in Europe and England where his father took a 1-year-long sabbatical. All throughout his life, he was a voracious reader.

After graduating from high school, Philip Warren Anderson received the newly launched full-support National Scholarship and was sent to the esteemed Harvard University in 1940. Initially, he intended to take up his favorite subject mathematics as his subject in the freshman year, but on the advice of his parents’ close friend Wheeler Loomis, he chose physics. Loomis was also the head of the physics department at the University of Illinois.

At that time, the World War II was underway. Students at Harvard were asked to concentrate more on the subject of ‘Electronic Physics’ as it could prove beneficial in wartime situations. From 1943 to 1945, Anderson spent a brief period at the U.S. Naval Research Laboratory where he built antennas. In 1945, Anderson started his postdoctoral studies at the Harvard University and subsequently earned his doctorate in the year 1949. During his graduation days, he got the opportunity to study under the eminent American Physicist John Hashbrouk Van Vleck.

Philip Warren Anderson's career as a physicist began in 1949 at the Bell Laboratories situated on the Murray Hills in New Jersey. He worked at the organization for 35 long years. During his tenure in the organization, he mainly studied the topic of condensed matter physics and made various extraordinary inventions including the Anderson localisation and Anderson Hamiltonian. The concept of Anderson localization explained the absence of diffusion waves in a disordered medium while Anderson Hamiltonian was used to describe magnetic impurities embedded in metallic hosts. He also developed the approach to the BCS theory of superconductivity during this time.

Recognizing his contributions in the field of science, Philip Warren Anderson was chosen to be a Fellow of the American Academy of Arts and Science in 1963. Four years later, in 1967, he became a professor of theoretical physics at the Cambridge University in the UK. During his eight years of professorship at the university, he and other members of his research team continued to study the Theory of Condensed Matter. In 1975, he was appointed as a professor at Princeton University. He retired from Bell Labs in 1984.

As a scientist, Philip Warren Anderson researched a variety of topics and wrote about them. Some of his significant works are ‘Concept of Solids,’ ‘Basic Notions of Condensed Physics’ and ‘Theory of Superconductivity in the High-Tc Cuprates.’ Anderson is currently in the position of Professor Emeritus at Princeton University and is also one of the board members of Scientists and Engineers for America.

Philip Warren Anderson is the co-recipient of Nobel Prize in Physics. He was awarded the prize in 1977 for his research into the electronic structure of magnetic and disordered systems. The other co-recipients of the award were Sir Nevill Francis Mott and John Hasbrouck van Vleck.

In 1964, he was honored with the Oliver E. Buckley Condensed Matter Prize.

In 1980, Philip Warren Anderson was appointed as a Fellow of the Royal Society.

He won the prestigious National Medal of Science in 1982.

93-year-old Philip Warren Anderson is an Atheist. He married Joyce Gothwaite in 1947. Joyce is a painter by profession. The couple is blessed with a daughter named Susan. Anderson featured in the list of 22 Nobel Laureates who have signed the Humanist Manifesto.