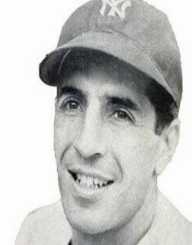 Phil Rizzuto was an American baseball player and broadcaster.

Philip Francis Rizzuto was born in Brooklyn, New York, on September 25, 1917. He studied at the Richmond Hill High School in Queens.

Phil Rizzuto started playing baseball and football in high school. In 1937, he was signed by the New York Yankees. He spent the next few years playing in the Minor League. He made it to the Major League in 1941. He made a break from playing from 1943 to 1945. During that time, he served in the U. S. Army, and he was part of a Navy baseball team. He returned to the Yankees in 1946. He stayed there until 1956.

Rizzuto was known for being shorter and slimmer than most of the other players. Still, he was a good player. In 1950, he won the Most Valuable Player Award. He also made several World Series records in different categories. Some of them have not been surpassed to this day.

After ending his career as a player, Phil Rizzuto became a broadcaster. He announced and commented games on radio and television. He held that job for the next 40 years. He became known for his exciting broadcasting style. He popularized the phrase “Holy cow.” He talked about random things during the games. He sometimes congratulated the listeners for their birthdays. From 1957 to 1977, he held a short evening sports show on the CBS Radio Network.

Rizzuto was the spokesman for the TV ads of the mortgage company The Money Store. He also co-owned a bowling alley in New Jersey. He appeared in some TV shows, such as What’s My Line, The Ed Sullivan Show, and others.

Phil Rizzuto was involved in different charity programs. He raised millions of dollars for Saint Joseph’s School for the Blind. He donated a lot of his profits. He also hosted fundraisers, such as the Annual Phil Rizzuto Celebrity Golf Classic.

In 1994, Rizzuto became a part of the Baseball Hall of Fame. He was also elected to the New Jersey Hall of Fame. There is a park named after him in the city of Elisabeth. His plaque stands in Monument Park.

Phil Rizzuto spent the last few months of his life in a nursing home in New Jersey. He had health problems with his stomach and muscles. He died on August 13, 2007, about a month before his 90th birthday.