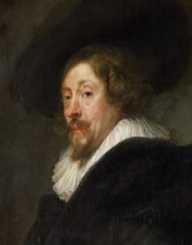 Peter Paul was a Dutch artist that become one of the most influential painters of his generation and as well as served as a diplomat for European royal families. He was born in an influential family as his father worked as a lawyer for the House of William I. His mother was an author. However, Ruben moved with his mother to Antwerp upon the death of his father.

Peter Paul was educated in humanism before he became an apprentice to some notable mannerist painters of that time. Later on, Rubens became of the well-known painters in Europe moving around Europe for business purpose. His works are always in high demands among the royal families in the continent.

Peter Paul was born on 28 June 1577 in the present day Germany to Jan Rubens and Maria Pypelincks. His father was a lawyer while his mother was an author. He was one of the seven children of his family. He grew up as a Catholic and placed the strong influence of Catholicism on his works as an artist. His father died in 1587, and he moved with his mother to Antwerp after two years. Peter Paul learned humanism and languages here. At the age of 14, he took up an apprenticeship with Tobias Verhaeght. After this, he took up an apprenticeship with two notable mannerist painters, Otto Veen and Adam Von. He later became a master in 1598 at the Guild of St Luke.

Peter Paul went to live on in Venice and Rome in Italy where he studied a lot of things about Tintoretto and Titian’s works. He also studied some other works which were not made known to the public. He later got the Duke to pay for his journey to Florence to be able to study the Traditional Roman Art. He went ahead in painting the altarpiece, St Helena with the True Cross at the Roman Church of Santa Croce in Jerusalem. Peter Paul went ahead to Spain on a diplomatic visit before coming back to Italy in 1604. During his stay in Italy, he is known to have produced several works including the Patriot of Maria di Antonio among others. He is also known to have worked on the high altar of Santa Maria Church in Vallicella, one of his most important works.

Due to his mother’s illness in 1609, Peter Paul moved to Antwerp where he met Archduke of Austria. He later went ahead in establishing his studio in Antwerp where he taught students on painting. His students were known to have made different notable productions which include The Raising of the Cross. He was later entrusted in 1621 with some diplomatic duties by the Hapsburg Rulers from Spain. This was when he was summoned to create paintings related to the Queen Mother of France life, Marie de Medici. He was also involved in gathering intelligence apart from his role as a diplomat. He got a raise of nobility in 1628 and created a copy of Titian’s Fall of Man.

Peter Paul later traveled to England where he created an Allegory of Peace and War. He became an influential artist and painter of rare quality. He later went back to Antwerp where he spent the rest of his life in 1630. He completed many works including the Feast of Venus, Three Graces and The Judgement of Paris. In the same year, he got knighted by Charles I for his achievement.

Peter Paul produced a large body of work throughout his career as a painter which was said to be a lost painting. This painting was very popular and was named Massacre of the innocents. It was sold for $76.2 million in 2012.

Peter Paul got married on 3 October 1609 to Isabella Brant who belonged to an influential family in Antwerp. He had three children with her, but she died 17 years after the marriage. He later married the niece of his first wife, Helene Fourment, in 1930. He had five children with her. He, however, died after a fatal heart attack on 30th of May, 1640.