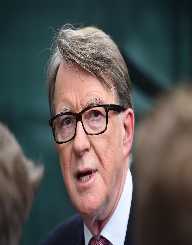 Peter Benjamin Mandelson was born 21st October 1953, to George and Mary Mandelson. He was born in Hampstead Garden, London, in England. His father came from a Jewish family, and he worked in advertising for The Jewish Chronicle.

In 1978, Mandelson joined the British Youth Council, where he became Chairman. He met several of his Labour colleagues during this period.

In 1979, Mandelson joined the Lambeth Borough Council. He left the position in 1982, unhappy with the politics of the Labour party.

Over the next three years, Mandelson worked as a television producer. During this time, he met John Birt, who would also become a future political colleague.

Mandelson won the role of Director of Communications for Labour in 1985. He successfully lifted the profile of Labour, and in 1987 they won an extra 20 seats in parliament. As a result, the party believed they were a serious contender for the following election.

In 1991, Mandelson stepped down from his position to become a Labour candidate. In 1992, he won the seat of Hartlepool. Although the current leader, John Smith, disliked him, he became close friends with both Tony Blair and Gordon Brown. Blair and Brown were both future contenders for leader of the party.

Smith died in 1994, and Tony Blair took the leadership position. Mandelson had backed Blair, and he then became campaign director at the following election in 1997. Labour easily won the election.

Mandelson worked in the Cabinet Office as a Minister without Portfolio. In other words, he worked as a coordinator. He joined Cabinet in 1998, where he became Secretary of State for Trade and Industry. He also became a Privy Counsellor.

In late 1998, Mandelson resigned from Cabinet. He received an interest-free loan to purchase a house. At the time, Mandelson's department was conducting an inquiry into his colleague's business affairs. The scandal that followed meant Mandelson had to resign.

Mandelson sat out of Cabinet for nearly a year. He became Secretary of State for Northern Ireland in October 1999.

In January 2001, Mandelson resigned again from Government. Accused of interfering in a passport application, he found himself under a cloud of controversy yet again. At the general election later that year, the public voted Mandelson back in with a huge victory. Although Labour won, Mandelson found himself without a portfolio once again.

As a retired European Commissioner, Mandelson received a yearly pension. Although seen as a conflict of interest, Mendelson denied there was an issue.

In October 2008, he returned to Cabinet. His new title was Business Secretary, and he received the title of Baron. He then moved into the House of Lords rather than the House of Commons. Another reshuffle took place in June 2009, and Mandelson became Lord President of the Council. He received the title of First Secretary of State. Mandelson worked on 35 committees, as well as subcommittees.

Labour lost the election in 2010. Mandelson released his autobiography, called, The Third Man: Life at the Heart of New Labour.

In late 2010, Mandelson established a consulting company in conjunction with one of his colleagues. They called the company Global Counsel, and they received financial support from a large advertising firm called WPP.

January 2011 saw Mandelson join an investment banking company called Lazard, as a senior adviser. Two years later, he joined Deutsche Bank on the Board of Trustees. He has continued to work in an advisory capacity with other high-profile companies.

Mandelson found himself involved in several controversies during his years in Parliament and as European Commissioner. Charges of wrongdoing were never forthcoming.

Mandelson is gay and has lived with his partner since 1998. He has carefully guarded his personal life through the years and has been the subject of harassment from the press.

Mandelson was subject to antisemitic behavior from another MP, but he gracefully stood up to the abuser.