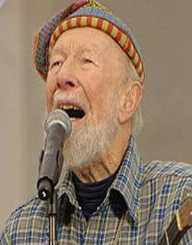 Few people are as strongly associated with a certain set of ideas as Pete Seeger is. The late singer and songwriter went far beyond writing for himself. He created songs, which tell stories, hold immortal morals and touch every heart with their gentle hands. He was a colorful singer, who revitalized American folk music, imbuing it with a taste of justice and hope.

Those two words accompanied seemingly all of his songs, many of which carried eternal messages and became eternal themselves. Seeger did not confine himself: there was not an American or a world event towards which he was indifferent. A revolutionary by heart, he turned folk music into his greatest weapon in fighting injustice.

New York City of the distant May 3, 1919, saw the birth of Pete Seeger. Music ran in the family: his father was musicologist Charles Seeger, who taught at the University of California, and his mother, Constance Edson Seeger, was a concert violinist, who also taught in the Julliard School.

His passion for music was not a priori, though, and there was more than one source of inspiration for young Pete. He first heard a banjo at a festival in Asheville, North Carolina, which sparked his love for the instrument. His uncle, Alan Seeger, who was a poet, inspired Pete for his songwriting, too. His brother and sister, Mike and Peggy, would also go on to become involved in music.

In 1936 Pete Seeger entered Harvard on a scholarship basis, but just two years later he dropped out. He failed to take an exam and thus lost his scholarship. It is interesting to note how a single event can change the lives of two people so drastically.

He was in the same class as John F. Kennedy, who later went on to become the president of the same USA Seeger would criticize. As a dropout, Pete started roaming the country, hitchhiking whenever possible. During his journeys, he gathered many folk songs, hymns, and national motives for his future songwriting. It was in this period that he developed his skill on the banjo.

He and three other singers organized the Almanac Singers, not betraying the style they had embraced. Together, they managed to issue a few albums. Their music future seemed prosperous, but World War II saw Pete drafted in 1942 and sent to the Pacific theatre. As a result, the group disbanded.

New Life For His Music Career

Upon coming back from the war, Pete Seeger did not waste time and found a music magazine Sing Out! He formed another quartet to replace the Almanac Singers in 1948, the Weavers.

Through concerts and local performances, they quickly rose to a national level. The band focused on folk songs but also wrote originals. The period following WW2 was also marked by a severe anti-Communism craze in the USA. Pete Seeger did not go unaffected by this and was accused of Communist collaboration, which quickly took its toll on the band, too.

Their media popularity dropped drastically. In 1952, the band disbanded over the circumstances. Over the next 10 years, they reunited and broke up one more time.

The afore-mentioned accusations against Pete were unlawful not because he was not conducting any civil activity. Due to the public attitudes of the time, the authorities were quick to associate his views with those of Communists. He was an active opponent of war, criticizing the Vietnam War, and later the Iraq War.

This position gradually improved his image to the American public during the ’60s. He participated in the so-called “Freedom Marches” in several US cities. Pete kept writing anti-war songs, which became a favorite for a whole generation. War was not the only topic he was active about; He promoted environmental friendliness, addressed many issues in that regard.

Most notable was his participation in the program to clear the Hudson River of pollution. He actively protested against nuclear weapons, which was a hot topic in the ’60s. Nowadays his name is associated with political and civil activism. His songs like We Shall Overcome are played during marches and replayed during concerts of fellow activists. Pete Seeger was a true “citizen of the planet”.

At the turn of the century, Pete had completely removed the stains from the ‘50s. He spent his final years with his wife, Toshi Seeger, in a personally built cabin near New York. Seeger was as lively as ever in his final years and kept collecting and playing songs on his banjo. He never stopped attending fairs and inspiring young children to be full of courage and love.

His activism never truly ceased to exist. He died just 6 months after his wife, at the age of 94, on January 27, 2014. Pete himself would look at this fact as a beautiful event, perhaps as reunification with love, and the Earth itself.

Apart from the love of the people and an undisputed champion of American folk music, Pete Seegers received a number of awards for his art and activities. He received a National Medal of Arts in 1994, which was created by the Congress to honor patrons of the arts. Two years later, he was introduced to the Rock and Roll Hall of Fame.

He won four Grammy Awards. The first one was in 1993, the Grammy Lifetime Achievement Award. He received his second award for his album, Pete, in 1997. The third Grammy Award he won in 2009 for his At 89, which he issued when he was, well, 89. And finally, in 2011, he won a Grammy for best musical album for children for Tomorrow’s Children.

He married his wife, Toshi Seeger, in 1943, and lived with her ever after. They had three children. It is interesting to note that Toshi was of Japanese ancestry. Pete married her in the middle of World War 2 when the USA was consumed by anti-Japanese feelings. This is yet another testimony of Pete's open-minded worldview.

Pete Seeger wrote a great number of memorable songs which still excite the public today. Among them are the already-mentioned anti-war songs as “Where Have All the Flowers Gone” and “Bring 'Em Home”. The latter was provoked by the Vietnam War. “Turn, Turn, Turn” was another hit which Pete produced during his solo career in the ‘60s.

The period also gave birth to two of his most famous albums: God Bless The Grass and Dangerous Songs!? Seeger also wrote a book: The Incompleat Folksinger (1972). It is an “album” of his songs and writings about folk singing. With his energetic efforts to revitalize folk songs, Pete Seeger left a big, influential footprint in the world of music. Apart from this, he gave a simple, human face to a lot of pacifist and peace-loving ideas, which remain powerful today.